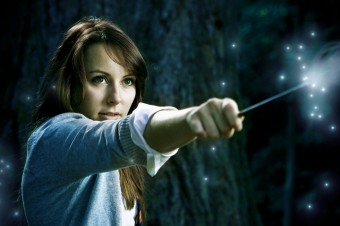 Today I found out the origin of the word “abracadabra.”

These days you might hear this word before some stage magician pulls a rabbit out of his hat, but hundreds of years ago people actually believed that “abracadabra” was a magical spell. The exact origin of the word is up for debate, but perhaps one of the oldest records we have of “Abracadabra” being used is a snippet from a Roman sage named Serenus Sammonicus in the 2nd century AD from his Liber Medicinalis:

The malady the Greeks call hemitritaeos is more deadly. None of our ancestors could name this disease in our own language, nor did they feel the need to. On a piece of parchment, write the so-called ‘abracadabra’ several times, repeating it on the line below; but take off the end, so that gradually individual letters, which you will take away each time, are missing from the word. Continue until the (last) letter makes the apex of a cone. Remember to wind this with linen and hang it around the neck. Many people say that the lard of a lion is effective . . .

It’s unlikely that Sammonicus came up with the word on his own and it is thought to have been in use before then. There are a couple of theories as to where it might have ultimately come from. First, it could have been derived from the equally magical word “abraxas” whose letters, in Greek numerology, add up to 365—the number of days in the year. It could be that early sages thought this was a powerful word and somehow created “abracadabra” out of it and turned it into a “cure.”

Alternatively, the word might be derived from the Hebrew words for “father, son, and holy spirit”: “ab, ben, and ruach hakodesh” respectively. Perhaps more intuitively, it could be derived from and Aramaic phrase “avra kadavra.” Harry Potter fans will likely know that this is what JK Rowling used when she was coming up with the killing curse “avada kedavra.” In an interview, she stated that the original phrase meant “let the thing be destroyed,” (more on this in the Bonus Facts below) which would suit the cure-theory well; abracadabra was written to “destroy” the sickness.

As strange as it may seem today, people did wear talismans of sorts with the “abracadabra” cone as Sammonicus described. It was thought to cure diseases, fever, and other problems by siphoning it out of the person and expelling it through that bottom “A”. Obviously it would have no more than a placebo effect on the user, but people seem to put a lot of stock in it. For example, in the 1500s Eva Rimmington Taylor wrote The Troublesome Voyage of Capt. Edward Fenton, in which she claimed:

Banester sayth yt he healed 200 in one yer of an ague by hanging abracadabra about their necks.

Abracadabra was still used as a “cure” well into the 18th century, as evidenced by a 1722 book by Daniel Defoe titled Journal of  Plague Year, which lamented the use of such charms:

People deceiv’d; and this was in wearing Charms, Philters, Exorcisms,  Amulets, and I know not what Preparations, to fortify the Body with them against the Plague; as if the Plague was but a kind of a Possession of an evil Spirit; and that it was to be kept off with Crossings, Signs of the Zodiac, Papers tied up with so many Knots; and certain Words, or Figures written on them, as particularly the Word Abracadabra, form’d in Triangle, or Pyramid…

How the poor People found the Insufficiency of those things, and how many of them were afterwards carried away in the Dead-Carts.

Eventually, people let go of the abracadabra superstition and by the 19th century the practice of hanging an abracadabra charm around your neck to cure disease had died down. At this point, the word started to take on the meaning of “fake magic” which is what we know today—after all, magicians don’t actually make rabbits appear out of thin air… or do they?!? 😉