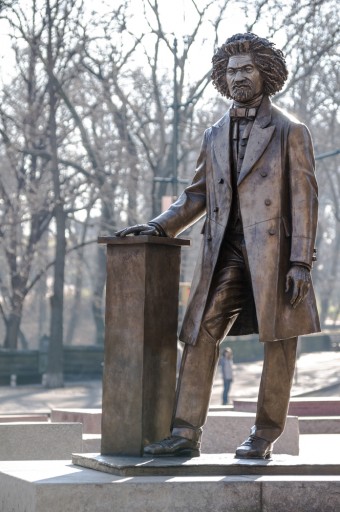 “We shall look over the world, and survey the history of any other oppressed and enslaved people in vain, to find one which has made more progress within the same length as the colored people of the United States. These, and many other considerations which I might name, give brightness and fervor to my hopes that that better day for which that thoughtful amongst us have long labored, and the millions of our people have sighed for centuries, is near at hand.”

With those written words, the great Frederick Douglass laid down his pen. Through the 77 years of his life, he had been a slave, a runaway, a world-renown orator, a best-selling author, an adviser to presidents, a candidate for national office, a US Marshall, and an advocate to both men and women, particularly being a key advocate for the right for women to vote. Life had been hard for Frederick, but he was put on this Earth to make life a little less hard for everyone else, no matter who they were or where they came from.

Born into slavery on Maryland’s eastern shore in 1818, Frederick Augustus Washington Bailey (the name given to him by his mother) was the offspring of a slave mother and a white man, thought to be his mother’s master. Early in his life, his mother was “rented” to another farm in the north, leaving young Fred to be raised by his grandmother.

His grandmother Betsy, while a slave herself, was married to a free man. There was a significant free African-American population on the eastern shore and it exposed Frederick to the idea that you didn’t have to be tied to your born lot in life. Around 1825, he was sent to the Wye House (he wasn’t sold, he moved to a different property of the same owners), separating him from his grandmother.

Life got even tougher Frederick, as he bore witness to, and endured himself, beatings and starvation. His master, Aaron Anthony, was particularly cruel. Fortunately, the women of the Anthony and Auld (Anthony’s son-in-law’s family) households saw great potential in Frederick. Along with their own similarly aged sons, they taught Frederick how to read and write. When the men of the house learned of this, they immediately put a stop to it. It was against the law, not to mention the social code of the day, to allow a slave to become literate. Undeterred, Frederick continued to teach himself, knowing that an education was the key to a life of freedom.

Over the next ten years, Frederick would also often be caught teaching other slaves how to read. He would be punished, but that did nothing to stop him. After an escape plot was foiled, Frederick was sent to a reputed “slave breaker.” But he could not be broken.

While working in Baltimore, he met a free black woman named Anne Murray. They fell in love. He had tried escaping twice before and failed, with severe consequences.  The third time was a charm for him.  In 1838, disguised as a sailor, and with identification papers from a real free black sailor, he endured a harrowing, but short, 24 hour journey that ended in the home of abolitionist David Ruggles in New York.

He said of this,

I have often been asked, how I felt when first I found myself on free soil. And my readers may share the same curiosity. There is scarcely anything in my experience about which I could not give a more satisfactory answer. A new world had opened upon me. If life is more than breath, and the ‘quick round of blood,’ I lived more in one day than in a year of my slave life. It was a time of joyous excitement which words can but tamely describe. In a letter written to a friend soon after reaching New York, I said: ‘I felt as one might feel upon escape from a den of hungry lions.’ Anguish and grief, like darkness and rain, may be depicted; but gladness and joy, like the rainbow, defy the skill of pen or pencil.

Now a free man, Frederick Bailey married Anne Murray (they remained married for 44 years until her death) and changed his surname initially to “Johnson”, but then later to “Douglass”, after reading Sir Walter Scott’s The Lady of the Lake, which features the “Douglas” clan.

In New York, his personal narrative and incredible intelligence became his ticket to being one of the most sought after abolitionist orators of the day.

Traveling around the midwest and northeast, Douglass told his story of being torn from his family, beaten daily, and his heroic escape. He gained admirers and fans, most prominent of which included fellow abolitionist William Lloyd Garrison.  In 1845, he published his first book “Narrative of the Life of Frederick Douglass, an American Slave.” It became a best-seller. (And is a phenomenal read even today.)

Rochester, the western New York town in which the Douglass family settled, was the perfect place for Frederick Douglass to call home. It was a hotbed of progressive activity and ideas. Besides Douglass and his now-friend Garrison, the women’s suffrage advocate Susan B. Anthony; escaped-slave and caretaker of the Underground railroad Harriet Tubman; and New York governor and well-known abolitionist (later, Lincoln’s Secretary of State) William Seward all called Rochester home during their lives.

His social conscience and the environment around him encouraged Douglass to take on other causes. Douglass was one of the few men to attend the first Women’s Rights Convention in Seneca Falls (about 50 miles from Rochester) in 1848, and played a key role in swaying the opinion at those meetings that women should be given the right to vote (many of the women at the convention, including one of those who organized it, thought that was a ridiculous notion). He spoke out against the way the Native Americans were being treated. He campaigned on behalf of all Union soldiers to be paid equally- no matter race, social status, or what state they were from.

In April of 1861, with the attack on Fort Sumter, the Civil War commenced. Douglass believed that African-Americans had a responsibility to take part in the war and a right to be able to. Fortunately, the Commander-in-Chief of the Union army, President Abraham Lincoln, agreed with him.

Frederick Douglass became Lincoln’s connection to the African-American community and he invited him to the White House on several occasions.  They would discuss ensuring the equal pay and treatment of African-American soldiers, the link between preserving the Union and the abolition of slavery, and granting escaped slaves asylum.  Following his reelection, Lincoln invited Douglass to a White House reception. It was the first time a black man was invited to a reception of that nature.

The two had an immense amount of mutual respect for one another, but it didn’t mean they always agreed. Lincoln’s first priority was always to preserve the Union and Douglass felt that Lincoln did not go far enough with the Emancipation Proclamation. He was also disappointed that Lincoln never publicly supported suffrage for African-Americans. Once, he even called Lincoln “the white man’s President.” Even after Lincoln’s death, when saying anything publicly in the North that was even remotely negative about Lincoln was practically blasphemes, Douglass spoke about the fact that Lincoln “shared the prejudices common to his countrymen towards the colored race.”

But on April 14th, 1876, nearly 11 years after Lincoln’s assassination, Douglass delivered what would be his greatest speech on the subject of Lincoln during the unveiling of the Freedmen’s Monument. While he wasn’t afraid to give his thoughts on Lincoln’s prejudices, he also described Lincoln as such: (full speech here)

Though high in position, the humblest could approach him and feel at home in his presence. Though deep, he was transparent; though strong, he was gentle; though decided and pronounced in his convictions, he was tolerant towards those who differed from him, and patient under reproaches. Even those who only knew him through his public utterance obtained a tolerably clear idea of his character and personality. The image of the man went out with his words, and those who read them knew him.

On February 20th, 1895, at the age of 77, Frederick Douglass passed away in Washington DC, hours after giving a speech to the National Council of Women. He was a tremendously admired man for his commitment to his convictions and unwavering advocate to the African-American community. He was welcomed by Presidents, kings, and leaders across the world.  Thousands attended his funeral in New York and you can still visit his gravesite today, in the Mount Hope Cemetery in Rochester.