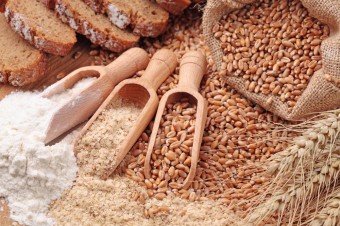 Grape-Nuts is a wheat and barley cereal developed by C.W. Post in 1897, and it has actually made some interesting contributions to American food history.

A box of Grape-Nuts actually contains “whole grain wheat flour, malted barley flour, isolated soy protein, salt, whole grain barley flour, malt extract, and dried yeast.” It also boasts a number of essential vitamins and minerals. From what I could find, the recipe has remained largely unchanged since its introduction over 100 years ago, save for making the switch to whole grains. So just how did Grape-Nuts get their misleading name?

According to Post Foods, there are two versions of the story about how Grape-Nuts got their name. The most plausible theory is that, as Post used maltose in the original recipe which was called “grape sugar”, that’s where they got the “Grape” part. The cereal also has a bit of a nutty flavour, which is where “nuts” came from. Alternatively, some believe that the cereal looks a bit like grape seeds. Those seeds are also sometimes termed “grape-nuts”, even though grape seeds are not nuts, nor are such things as almonds, peanuts, Brazil nuts, etc.  Personally, I’m strongly leaning towards the former theory as the correct origin of the name.

So I mentioned earlier Grape-Nuts have been at the centre of several historical events. For instance, the cereal was the first wide-spread product to feature coupons. In this case, they were “penny-off” coupons which became a big hit in the 1890s. The coupons were for other Post cereals—they were trying to get people to buy more of the product, and it worked.

More importantly, Sir Admiral Byrd might never have gone to Antarctica if it hadn’t been for Grape-Nuts. The expedition was sponsored by the cereal in 1933, making it possible to send the first two-way radio transmission. In addition, Grape-Nuts promoted the expedition by putting maps of the route on the back of their cereal boxes.

During World War II, Grape-Nuts were featured in soldiers’ rations, fueling the troops during battle. Because the cereal was light, compact, had a long shelf life, and was nutritious and healthy, it was a perfect item to include in rations. Similarly, Grape-Nuts saw Edmund Hillary and Sherpa Tenzing Norgay to the top of Mount Everest. The two would, of course, become the first people to reach the summit of the mountain, and they took Grape-Nuts along with them to keep them fueled on the long, strenuous climb.

In addition to expeditions and army rations, Grape-Nuts also sponsored The Danny Thomas Show, a popular series during the 1950s. If The Danny Thomas Show doesn’t ring any bells, you might recognize a character that appeared in the show during an episode that was promoting Grape-Nuts: Sherriff Andy Taylor. During the show, main character Danny visited Mayberry where he met up with Andy. Viewers loved the Sherriff so much that a spin-off series called The Andy Griffith Show was born, which of course became an instant American classic.

Post ran a number of successful ad campaigns, including several commercials that ran during The Andy Griffith Show featuring Sherriff Andy Taylor and Deputy Barney Fife. However, Post’s Grape-Nuts started becoming less popular as time went on, probably due to Post being sold from one company to another and not having a consolidated, consistent marketing plan. That’s when they decided to make the switch to whole grain, a staple in the cereal’s recipe today. They thought whole grain would be more appealing and keep up with the healthy image they were trying to project.

Ironically, in addition to being made of neither grapes nor nuts, Grape-Nuts aren’t all that healthy, either, though compared to most breakfast cereals perhaps one can consider them relatively healthy. Back in the day Post boasted that Grape-Nuts would “fill you up, not out.” However, it has since been found that the cereal has a Glycemic index of 71, higher than such sugary cereals as Fruit Loops and Frosted Flakes.  Further, table sugar only has a glycemic index of 60.

So Grape-Nuts is perhaps good for a quick energy spike before a morning workout, but the downside is that aside from scenarios like that, the cereal inducing a pretty large blood sugar spike could lead to insulin resistance (and later potentially Type 2 Diabetes). It is also fairly high in calories, leading to a small recommended serving size which most people promptly ignore, filling their bowl up with an absolutely massive amount of calories.  This further potentially contributes to obesity. Therefore, it’s likely going to “fill you out” along with “filling you up”.  So, essentially, the cereal is a lie…