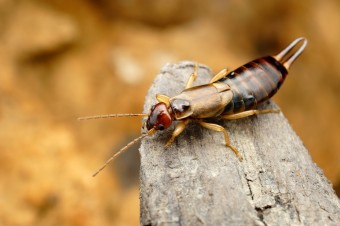 Let me just say I hate earwigs. Small, slimy-looking, fast moving, and always popping out of some dark place when I least expect it- no insect short of a silverfish fills me with more revulsion.

Now, to answer your question, we’ll start off talking about the mating habits of the earwig.  To make baby earwigs, the male grabs and holds onto the female and they, literally, bump uglies. The eggs may not fertilize immediately (the sperm can hang around for several months before fertilizing the eggs), but ultimately they will.

At some point, the lady comes to her senses- no doubt realizing the male is super creepy looking- and exiles him from the nest- yes, nest, that is not your ear.

Then she lays anywhere between 20 and 80 eggs . . . seemingly most of which end up on a chair where my husband sits, and my children come to play with their toys.

After hatching, earwigs develop in a series of five stages, each grosser than the last. The mother earwig, unlike most non-social insects, actually guards her young, at least until they leave the nest after the first molt. Throughout their development, earwigs retain that familiar handsome profile.

There seems to be a consensus that people have always thought the earwig would climb in your ear if given a chance. In fact, the name is thought by most etymologists to come from two Old English words that mean “ear insect” (ēare wicga).

While humans may have long associated the insect with burrowing into ears, in reality this almost never happens and even when it does, they aren’t going there to lay eggs and burrow into your brain.  Earwigs simply like moist, dark places to hide, but they choose these places for day-time hiding, not at night when you are presumably sleeping.  At night, they hunt for insects and plants to eat.

That being said, throughout history, there have been anecdotal reports of earwigs being found inside people’s ears. One story submitted to the Bug Doctor by a man known only as Frank, goes like this:

At 3 am, my 8-year-old daughter awoke me from a sound sleep. She was extremely upset. For the preceding few minutes she had attempted to remove a creature crawling about in her left external ear canal. A light sleeper, she had been aroused by the ‘sound of little feet.’ Otoscopic examination revealed a dark brown mass near the tympanic membrane. My brief discussion with her on the importance of proper hygiene was interrupted when I saw the form move. Then, bathed in brilliant illumination from the otoscope, a female earwig . . . measuring 20 mm in length, cautiously emerged, to the relief of insect, child and father.

While this story may or may not be made up, it doesn’t seem too far fetched to think at some point in human history, possibly many times, and earwig crawled into a person’s ear canal. As stated, there are many anecdotal stories, some even well documented, of this sort of thing happening, along with similar occurrences from many other small insects. Insects like exploring and if you let them crawl all over your body, eventually one might dink around in your ear canal for a bit to see what’s there.

But regardless, once there, the female earwig certainly isn’t going to find it a good environment to mate and nest. If left alone in the ear, she also would not burrow into a person’s brain and lay her eggs. Besides the fact that the ear canal / brain wouldn’t make a very good nest, this simply isn’t possible considering the amount of bone and other tissue the earwig isn’t equipped to burrow through.  At best, the earwig can use their pincers on you, but even these aren’t strong enough to do any real damage.

As for their often slimy appearance, leading some to believe that this is from earwax, this likely comes from the damp crevices where they reside as well as the waxy secretions from their abdominal gland.