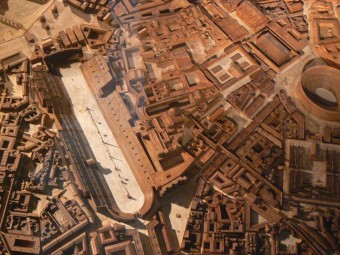 Today I found out that the Colosseum in Rome wasn’t finished until 80 AD; before that, Romans used the Circus Maximus for games.

The Colosseum is one of the most iconic landmarks in Rome and incredibly popular with tourists. Movies would have you think that chariot races, gladiator shows, and battle simulations always took place there, but that isn’t true. The Colosseum was finished relatively recently, all things considered. Before its completion, a more popular venue for such things was the Circus Maximus.

The Circus Maximus was arguably the largest structure in ancient Rome, with the capacity to seat 250,000 people according to Pliny (roughly a quarter of Rome’s population at the time; some historians today think the number might have been a tad smaller than Pliny said, around 150,000 rather than 250,000.  But either way, it was really, really big.)

It was built around the 6th century B.C.—well before the Colosseum was even a thought. The fifth king of Rome, Tarquinius Priscus, created the track which would later be used for chariot races, positioning it between the Palatine and Aventine Hills.

Historically, the area is known as the possible location of the famous Rape of the Sabine Women. If you’re unfamiliar, it’s a Roman legend that Romulus, the founder of Rome, negotiated with the Sabines who lived in the area to let him and his followers (who were mostly male) marry their women. When they refused, Romulus hosted chariot races which distracted the men and allowed the Romans to kidnap the Sabine women. The Roman historian Livy assures us that no sexual assault took place; rather, Romulus reasoned with the women and offered them citizenship and the ability to give birth to free men if they married the Roman men.

What better place to set up the race track for subsequent chariot races? The main purpose of the Circus Maximus was to hold chariot races as well as provide a venue for the Ludi Romani, or “Roman Games”. The games were often sponsored by rich, powerful Romans, and were used to honour the gods.

Ludi could be full-day or half-day events and included all manner of entertainment. From chariot racing, gladiatorial displays, plays, parades, religious ceremonies, and feasts, there was something for everyone at the Circus Maximus.

The space was also used to celebrate triumphs, or successes on the battle field. For instance, Tarquin the Proud celebrated his triumph there as a sort of homage to the god Jupiter for his victory over the Pometia.

The Circus underwent numerous improvements over the many centuries it was in use. The first Etruscan king created a raised wooden platform to seat Rome’s rich and famous, while his grandson added additional seating for the commoners. Around 50 BC, Caesar ordered that the seating be extended around the track, which resulted in the largest seating capacity the Circus Maximus had yet seen.

However, it proved to be prone to damages. In 31 BC, a fire swept through the stadium, destroying many of the seats that Caesar had so recently built. It was rebuilt, but another fire during Emperor Nero’s time saw further destruction. In addition, the area was notorious for flooding as a stream had to be redirected to provide enough room for the Circus’ construction. It was rebuilt out of stone around the end of the first century AD, likely to avoid further fire and water damage.

Initially, the Ludi were held annually or a couple of times each year. However, Rome was constantly expanding. Soon, Ludi became something of a status symbol for those hosting them. The need to impress combined with the popularity of the shows and games resulted in more and more games being held. By the second century BC, the number of games had grown considerably—around 57 days were dedicated to Ludi, or over one every week!

The Emperors of Rome were pressured to build specialized venues to host a variety of different events at once. The Circus remained a popular place to host chariot races. On the other hand, many of the other games moved location. Construction began on the Colosseum around 72 AD, under the reign of Emperor Vespasian. It was originally called the Flavian Amphitheatre.

The Colosseum was well-designed; in the shape of an ellipse, it allowed for seating all around. It had significantly smaller capacity than the Circus Maximus, able to seat only around 55,000 viewers.

The Colosseum replaced the Circus as the prime space for gladiatorial shows and staged animal hunts, called venatio. There are even reports that simulated sea battles took place there at one time, but it’s unclear today how exactly that worked.

Needless to say, the games remained extremely popular throughout the years. The Colosseum was actually kept in use until the 1300s, when an earthquake left part of it in shambles. The stone that fell was used on other buildings, and a religious order moved in. The Church continued to have a hold on the Colosseum well into the 1800s.

The Circus Maximus didn’t fall out of use until the 6th century AD, having been in use for over one thousand years. The stones in the structures were gradually taken away to use on other buildings, while the actual chariot track was buried under water and soil. It was excavated starting in the 19th century. Today, the Circus is a park used for gatherings, concerts, and celebrations—a modern twist on an ancient venue.

The Colosseum is, of course, a popular tourist attraction, with millions of people visiting every year. It’s also been used as a venue for Roman Catholic religious ceremonies in recent years, though large spectacles are no longer an option due to the fragile state of the monument and the minimal seating that survives.