The Roller Coaster Designed to Kill Its Passengers 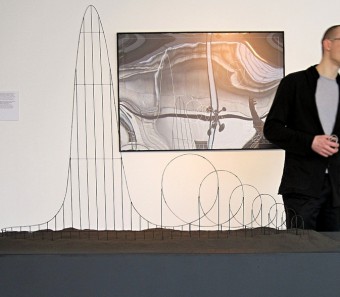 In 2010, architect and PhD candidate at the Royal College of Art in London, Julijonas Urbonas, from Lithuania, decided to attempt to design a method of euthanizing people that they might even enjoy.

His solution- the Euthanasia Coaster, which he designed and built at a precise 1:500 scale. It’s a roller coaster that could seat up to 24 passengers and give them a good time before ultimately killing them in a painless and euphoric way. How does it work?

First, the coaster takes the passengers up 1,670 ft (509 meters) (which would make it about 3.7 times taller than the current tallest roller coaster in the world, the Kingda Ka). Next, the passengers would plummet down the other side reaching a maximum speed of over 200 mph.

Up to this point, it’s been all fun for the passengers, assuming they like roller coasters that is.  If they, like me, find the free fall sensation to be extremely painful… well, up until this point, they’re going to have a bad time.  And after, well… that’s not the best either.

You see, what comes next is that, after the coaster hits the bottom, it then goes into a loop, which at the speed the passengers would be going at would exert about 10 G’s of force on them, enough to drain their brain of the necessary life giving nutrients and oxygen from their blood.

Six more loops follow this first big loop, with the loops progressively getting smaller and smaller in order to maintain the 10 G’s of force throughout the loops. With the loop section designed to last 60 seconds, all without blood being able to get to the brain, the prolonged cerebral hypoxia *should*, according to Julijonas Urbonas, render the vast majority of the passengers dead.  (I’m skeptical- and am going to have our resident paramedic writer Scott answer whether this would really work as part of an upcoming article on how long someone’s heart would have to stop for before there would be no point trying to resuscitate them.)

Of course, if any survived, they could then just be run through the coaster again.  Or, as they’re all likely to be passed out, at that point I guess someone could just shoot them or lop off their heads or something.  They wouldn’t be conscious, so probably wouldn’t mind if some less fun method was used to kill them at this point.

After all the riders are dead, the bodies could then be unloaded and new passengers put aboard, and as Urbonas said

Thanks to the marriage of the advanced cross-disciplinary research in space medicine, mechanical engineering, material technologies and, of course, gravity, the fatal journey is made pleasing, elegant and meaningful…

In theory, only people who wanted to be euthanized would be aboard the coaster. Further, the single long ride up to the top isn’t just for needed potential energy, but also to give the passengers a chance to consider their decision for a couple minutes as they climb.  At the top, they choose to get off if they want. And, in fact, according to Urbonas’ design, the coaster would not continue down until those aboard all pressed a “fall” button, else the coaster would just stay there.

Although, how they’d get down if they didn’t want to die isn’t clear from the picture of the design… But, according to Urbonas

The rider has a few minutes to contemplate his decision and his life in retrospect. He would find enough time to adapt to the height and get through a series of imaginary fatal falls, while realizing that the objects on the ground are getting smaller…The slightest movement of the car would trigger intense heart-beating and goosebumps and most importantly it would test your decision. Therefore the very top of the tower is an ideal place to give the very last word.