This Day in History: August 23rd 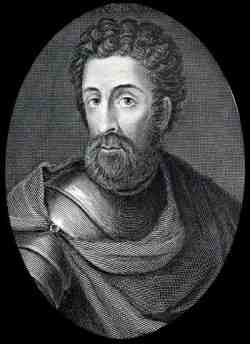 This Day In History, 1305: William Wallace Executed for High Treason

Thanks to Mel Gibson’s wildly popular 1995 movie “Braveheart” depicting the life of Scottish hero William Wallace, there has been a renewal of interest in the once rather obscure medieval freedom fighter. Artistic license was used liberally – but to great effect – to tell the story, but in any case little contemporary evidence survives about the life of William Wallace. We do know he was born around the year 1270 in Renfrewshire to a gentry family. Not aristocratic, but not a “man of the people” of peasant stock as was part of later legend.

By 1296, Scotland was undergoing a succession crisis that was the cause of much bickering and in-fighting within the country. Edward I of England took full advantage of this and proclaimed himself ruler of Scotland. This did not go over well with the Scots.

Wallace, whose father had been killed in a skirmish with the English, didn’t need a lot of encouragement to take up arms against the neighbors to the south. He attacked the town of Lanark in May of 1297, slaying the local sheriff in protest of the brutality of the feudal lordship and crushing taxes. Civil unrest quickly ignited into full-on rebellion, and Scotsmen came out of the woodwork to join Wallace as they drove the English out of Fife and Perthshire.

In September 1297, Wallace drove out a much larger force of English soldiers at the Battle of Stirling Bridge, which brought him national renown. This battle and subsequent victories did what many had thought impossible – loosened the English grip on Scotland. Wallace even took matters one step further by initiating attacks on England soil. Around 1298, he was knighted and proclaimed “Guardian of the Kingdom” by Scotland’s deposed king John Balliol.

The butt-whipping they received at Stirling still smarting, the English marched north through Scotland with renewed purpose. The two armies eventually hooked up in Falkirk where the Scots were soundly defeated and Wallace resigned the guardianship of Scotland to Robert Bruce and John Comyn.  He then took a road trip to France in hopes of gaining their support.

When William Wallace returned to Scotland in 1303, my, how things had changed. Both Robert Bruce and John Comyn had come to terms of truce with Edward I. Wallace was not part of these terms, and there was a large price on his head. Sure enough, in August of 1305, he was seized in Glasgow and taken to London to stand trial for high treason.

Wallace was tried at Westminster Hall on August 23, 1305. When the charges were read, he firmly denied being guilty of treason. As he had never sworn allegiance to Edward – how could he commit treason against him? But it really didn’t matter what Wallace had to say. The verdict and the sentence had been a foregone conclusion before the trial even began. William Wallace was to suffer the full horrors of a traitor’s death.

Wallace was strapped to a wooden hurdle and dragged through the narrow streets and the jeering crowds to Smithfield, the place of execution. First, he was hung from the gallows but taken down while still alive, so he could watch the executioner remove his intestines and genitals. Finally, mercifully, Wallace was beheaded, and then as a finishing touch all of his limbs were hacked off. (This is what they used to call being hung, drawn and quartered boys and girls. People used to bring their kids to watch this stuff like an afternoon matinee. I guess if you don’t have XBOX…)

As a warning to other would-be traitors, Wallace’s limbs were displayed in four different corners of Scotland, and his head was spiked on London Bridge. Edward I surely thought that was the end of that pesky Scotsman, but he couldn’t have been more wrong. Not only has his legend lived on in his own country, he’s a household name all over the globe today.