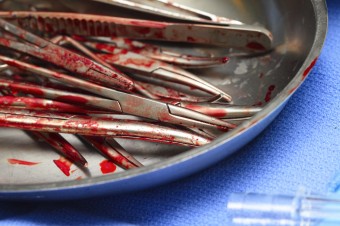 At the dawn of World War II, although biological and chemical weapons had been used previously in warfare, little was known of precisely how they worked on the human body. Curious, certain Japanese researchers in its army unit 731 conducted a series of indescribably cruel experiments testing the limits of the human body when subjected to harsh conditions, poisonous substances and lethal diseases.

Building from the ashes, literally, of a previous program, the “Epidemic Prevention and Water Purification Department of the Kwantung Army” (Unit 731 for short) was authorized in 1936. Bases were established at various places in China (occupied by Japan during the Second Sino-Japanese War), including at Pingfang and Hsinking.

Referring to their victims as maruta, meaning logs, the researchers experimented on, apparently, anyone they could get their hands on: Chinese, Russians, Koreans, Mongolians, Pacific Islanders, other South East Asians and even a few American prisoners of war all fell victim to the doctors at the camps.

Taking the scientific method to new lows, the researchers in unit 731 conducted a variety of experiments:

Victims were purposely infected with fatal, contagious diseases like the bubonic plague so researchers could learn exactly how the diseases affected the human body; because they feared that decomposition (which begins immediately once a person dies) might corrupt tissues, they dissected their victims alive. Likewise, because they worried that drugs might blemish their findings, the victims were given no anesthetic. Rather, they were vivisected while fully conscious of what was happening.

The scientists wanted to learn the limits of the human body, and, so, conducted a number of tests on their victim’s arms and legs. Sometimes, the limbs were frozen and thawed in order to study how frostbite and gangrene developed. At other times, limbs were cut off and sewn back onto the other side of the body. In a few experiments, when the limbs were removed, researchers just observed the loss of blood.

Many victims had all or part of their organs removed, and some even had organs detached, then re-attached, in unique ways nature never intended. Experiments were also conducted with high pressure, poisonous chemical exposure, centrifuges, burning, blood infusions from animals, burying and x-rays. Of course, since the purpose of these tests was to determine how much a body could withstand, the experiments would continue until the test subject was dead.

It is not known how many victims fell prey to these types of tests. However, estimates of the deaths at Pingfang (called by some the Auschwitz of the East) range from 3,000 to 12,000. Victims included women and men, as well as children and babies.

One of the fruits of unit 731’s labor was the development of bombs capable of delivering anthrax and the bubonic plague; these were tested in various places throughout China. In addition, fleas infected with the plague were dropped from airplanes in Manchuria as well as the Chinese cities of Changde and Ningbo. Furthermore, ponds and wells were seeded with typhoid, cholera and dysentery. Estimates of Chinese dead from these various experiments go as high as 200,000.

Attacks on the United States

In late 1944 and early 1945, the Japanese lofted thousands of incendiary balloons across the Pacific with the intention of starting massive forest fires on the West Coast. Luckily, only a few landed, causing nearly no damage (although six people died when a child inadvertently set one off). It has often been speculated that these balloons were, at least in part, an attempt to determine the viability of using balloons to send plague-infected rats and fleas across the Pacific to the U.S.

The balloon idea was rejected, but the lure of using biological weapons remained. In fact, to thwart an American planned offensive on Saipan in the Mariana Islands in 1944, the Japanese loaded a submarine with biological weapons to be deployed in the battle. It sank before the weapons could be unleashed.

Next up was “Operation Cherry Blossoms at Night”, a plan that involved filling planes with plague-infected fleas and having kamikazes crash them into American assets in San Diego (home of a large air base and major naval repair yard). The attack was set for September 22, 1945. It is unknown if the plan was ever viable, since Japan’s surrender on September 2, 1945, following the nuclear bomb attacks on Hiroshima and Nagasaki, rendered such a biological attack moot.

At the end of the war, unit 731 scientists destroyed much of the evidence of the program. According to reports, however, some infected test animals were released; it is believed that at least 30,000 people died from the plague in the Pingfang area within the first three years after the war.

Like the German rocket scientists and engineers who were folded into military and other governmental programs at the end of World War II through Operation Paperclip, unit 731’s scientists were given immunity from prosecution and their atrocities were covered-up in exchange for exclusive access to their findings.