Why There Are Bibles in Hotel Rooms

July 25, 2013 Emily Upton
Rhamit asks: Why are there Bibles in hotel rooms? When did this tradition start? 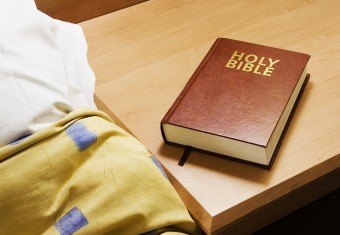 “Hotel Bibles” are also called “Gideon Bibles” after Gideon International, a group of male missionaries and Christian businessmen who took it upon themselves to provide this work to hotels across the nation.

Here’s how it all started. In 1898, John H. Nicholson stayed at the crowded Central Hotel in Boscobel, Wisconsin. The place was so crowded that he had to share a room with another person named Samuel E. Hill. They got to talking, as you might do if you were sharing a room with a stranger, and discovered that they were both Christians. That evening, they prayed together and talked about creating an association of traveling Christian businessmen.

In 1899, they put the idea to practice. Adding another to their number—William J. Knights—the men headed a meeting at a YMCA with the purpose to create an association of men who wished to achieve “mutual recognition, personal evangelism, and united service for the Lord.”

Initially, the three men mentioned above were the only people in the association because they were the only people who actually attended the meeting. Hills was named President, Knights Vice President, and Nicholson took on the roles of both treasurer and secretary. With that done, the men decided their new organization needed a name, and what better way to come up with one than to pray to God to lead them to the best one? The prayer apparently worked, or Knights simply had an epiphany, because not long after the prayer he directed the other two men to the Old Testament story about Gideon and declared, “We shall be called Gideons.”

Gideon’s story is recorded in the Hebrew Bible’s Book of Judges, chapters 6-8. He isn’t the most obvious of namesakes for a band of Christian men—one translation of his name is “destroyer.” However, Gideon was a man who was charged by God to lead a relatively small number of men (300) against a drastically larger army, and he was able to beat them. Gideon was a fitting namesake for the tiny organization who had big dreams. Gideon International says that the organization tries to keep with Gideon’s mindset… No, not hunting down and killing a massive army of Midianites, but willing to do God’s work at any time and in any way He intends it to be done.

Over the next few years, the Gideon Association gained more members, almost all of whom were travelling Christian businessmen who spent a lot of time in hotel rooms. The topic of becoming more effective witnesses in hotels arose, and in 1908 The Bible Project was adopted. The project was proposed by one of the association’s trustees who believed that the Gideons should make it their goal to put a Bible in every hotel room in the United States because it “would be a gracious act, wholly in keeping with the divine mission of the Gideon Association.”

Though the Bible Project was adopted in Louisville, Kentucky, the first Gideon Bible was actually placed in a hotel in Superior, Montana in 1908. Since then, more than 1.8 billion Bibles have been placed in hotels throughout the United States and in over 190 other countries, written in over 90 different languages.

But how do all of these Bibles get into the hotel rooms, and who pays for them all?

The Bibles are paid for entirely by donations to the group, and donations likely stem from individuals or churches who support the Gideons’ cause. As for how the Bibles end up in the hotel rooms, the Gideons will ceremoniously present a Bible to a hotel manager upon the opening of a new hotel. They then provide more than enough Bibles for each hotel room, to be distributed by the hotel staff. The Gideons will also provide replacements for Bibles that are worn or “missing”—the Gideons don’t believe that any of their Bibles have ever been stolen from hotel rooms; they are simply taken by those in need, and that’s counted as a success in their mission to spread the word of the Lord.

Supposedly, it is estimated that about 25% of people who stay in hotel rooms actually read the Gideon Bible provided to them. As Gideon International estimates that each Bible has a lifespan of roughly six years, that means that each one is read by roughly 2300 people during its hotel room stay. The numbers are based on research conducted by Gideon through the hotel industry. The Bible Project has done so well that a number of other religions have started providing literature to hotels. As such, you may find a Koran or the Book of Mormon next to your Gideon Bible at your next hotel stay.