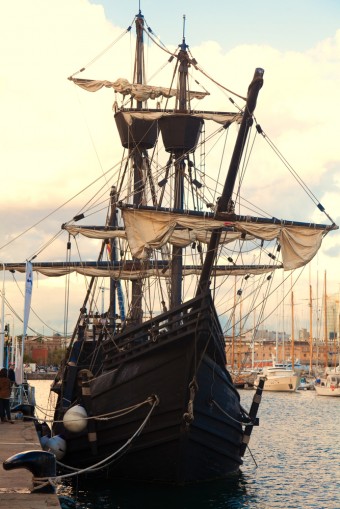 Today I found out about the secret life of Jean Baret, the first woman to circumnavigate the globe.

Born Jeanne Baret to a farming family in 1740, not a lot is known about her childhood and early life. It’s speculated that she likely had an interest in plants from a young age and later became an herb woman with a wealth of knowledge of the healing properties of local flora. As an herb woman, she would have had the opportunity to dispense medical advice to the local villagers as well as teach scientists about plants in the area—a relatively common request at the time.

Enter Philibert de Commerson, an aristocrat and scientist who was studying plants in the Loire Valley, where Baret was from. Perhaps it was her wit or looks, or perhaps Commerson was just incredibly into plants—but Jeanne Baret’s next recorded employer was Commerson himself, who took her on as a “housekeeper.”

We can’t say definitively that their relationship was anything other than employer and employee—after all, Commerson was married, and no one in the 18th century ever had affairs, right? 😉 We do know that Baret fell pregnant and gave birth in 1764, because the certificate of pregnancy—required by French law at the time—has survived the trials of time. Though Baret does not name the father of her child, the form was signed in a town 30 km away from Baret’s residence and witnessed by two men of relatively good standing. Not surprisingly, most historians think there’s little doubt that Commerson was the father of the baby and arranged the signing of the certificate.

A short time later, Commerson and Baret—who changed her name to Jeanne de Bonnefoy—moved to Paris. Baret gave her son up to the Paris Foundlings Hospital, where he died at about 1 years old.

In that same year, Commerson was invited to join a royal expedition led by Louis Antoine de Bougainville. The expedition was set to be France’s first circumnavigation of the globe, but it also aimed to collect plant and animal specimens in order to procure new flora and fauna that would adapt well to France and French colonies.

At first, Commerson hesitated. Not only was he often in poor health, requiring Baret’s services as a nurse—among other things—but she was also the one who organized his papers and documented his collections. (It is unknown how Baret came to be literate when it’s likely her parents were not—but it’s possible she was taught by a parish priest or even Commerson himself.) The royal invitation did allow Commerson an assistant, paid for out of the government’s pocket, but women were not allowed on navy ships at the time.

Then the idea was hatched: Baret would join the expedition dressed as a man.

For the most part, she was successful in hiding her gender. Several factors contributed to her effective masquerade: first, she joined the expedition just before the ship was set to sail in 1766. Commerson kept saying he hadn’t found the right person to be his assistant and simply took on a “young man” who presented himself at the dockside. Second, Commerson carried so much equipment with him that the ship’s captain gave up his cabin to make room for Commerson, his assistant, and all of the equipment. The cabin offered privacy that the rest of the ship did not, including private toilet facilities. Thirdly, Francois Vives, the ship’s surgeon, kept a journal in which he told of his suspicions that Baret was a woman. However, he said that when she was confronted by members of the crew, she told everyone that she was a eunuch and that waylaid any other questions for a time, presumably as at this point the crew were probably too busy cringing and holding their hands protectively around their nether regions.

For a while, the couple was able to dodge suspicion. Jean Baret’s accomplishments likely overshadowed any oddities she displayed. She is thought to have discovered many new plants, including one called Bougainvillea, ultimately named after the leader of the expedition. It turns out that Commerson’s worries about his own health were well-founded. He had trouble with ulcers on his leg at the time the Bougainvillea was found around Rio de Janeiro and was not able to do much walking. Thus, it was Baret who tramped through the rainforest and brought back most of the samples, as well as documented her own discoveries.

Unfortunately, it is difficult to live in close quarters with a large group of men without them noticing odd patterns of behaviour. It was noted that Baret never used the public, open air toilet. She was smaller in size than the rest of the men. Her disguise was difficult to maintain, and rumours had been circulating on the ship about her true sex for some time, as noted. There are many different accounts of how she was discovered, but most agree that it happened when the ship landed in Tahiti in 1768. Bougainville himself reported that a group of Tahitians surrounded Baret and exclaimed that she was a woman, and Baret had to be ushered back on to the ship in order to avoid a conflict. Other accounts don’t match up, however, with some saying that the Tahitians revealed her sex in a more “brutal” manner. Other journals said that she was not revealed on Tahiti but on New Ireland, and it was the crew who did the revealing.

Whatever the case, Baret and Commerson did not continue on with the Etoile after the masquerade was discovered. They disembarked at Mauritius, much to the relief of Bougainville who did not want to deal with having a woman illegally aboard his naval ship. The pair later travelled to Madagascar to document plants there, discovering a plant named after Baret—the Baretia bonafidia. Unfortunately, the plant had already been discovered and named by the time Commerson’s sample made it back to Paris. Only one plant from the expedition honours Baret—the Solanum baretiae—while over seventy species honour Commerson.

Commerson ended up dying on Mauritius, leaving Baret with a lot of preserved plants and records and little means of returning home to France. She found work on the island and married a French officer named Jean Dubernat. Then, around 1775, Jeanne Baret returned to France with her husband and plant specimens in tow. The plants were turned over to the government, and Baret was later granted a pension for her service on the expedition. Bougainville reportedly said her behaviour was exemplary aboard the ship—she was modest and hard-working. The pension honoured her great courage on the expedition, despite the fact that she had disguised herself as a man.

With her return to France, Jeanne Baret completed her circumnavigation of the globe, becoming the first woman to accomplish such a feat. Set up comfortably by the pension from the government, she died in 1807 at the somewhat ripe old age of 67.