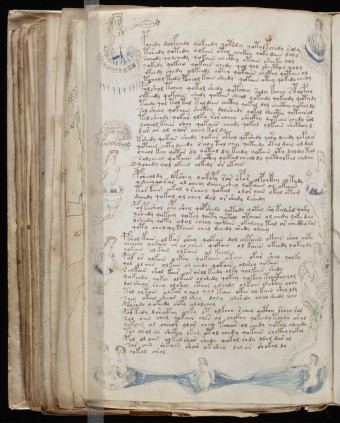 So mysterious, no one even knows exactly which century it was written in, the Voynich Manuscript has stumped medieval scholars, linguists, cryptologists and the curious for hundreds of years.

Approximately 6″ x 9″ x 2″, this octavo contains 240 pages of indecipherable text and a host of illustrations drawn with iron gall ink on vellum. Many of the pages are folios that fold out for full display. It is bound, also in vellum, although experts believe the cover was added after the original manuscript was written. It is possible that the color in the illustrations was added later, as well.

Other than that, it is difficult to describe the Voynich – you really have to see it. There is writing throughout the book in an unknown, yet seemingly simple, script accompanied by illustrations. But these are no ordinary drawings.

The curators at the Beinecke Rare Book & Manuscript Library, where the book is housed, have divided the illustrations into six categories:

Despite exhaustive efforts by people across the globe to decipher the text, no one knows who wrote the manuscript, when, where or even why.

Although some insist that radiocarbon dating and analysis of the inks used on the book demonstrate that it was written in the early 1400s, the Beinecke does not limit its possible copyright date more than sometime between “the end of the 15th or during the 16th century.”

The tale of what is known of the book’s provenance is best told out of chronological order:

The first records of the book come in letters written to the distinguished polymath and decipherer of hieroglyphics, Athanasius Kircher. In 1639, Georg Baresch wrote to Kircher about the manuscript; later, it is believed that, at his death, Baresch left the Voynich to the well-respected doctor, Jan Marek Marci. Marci wrote to Kircher, in a letter that was delivered along with the book, in 1666, noting that, among other things, the book had been owned by the Holy Roman Emperor, Rudolf II sometime between 1552 and 1612.

Rudolf, who loved science, nature and art, kept great thinkers like Erasmus and scientists like Johannes Kepler and Tycho Brahe in his court. Open also to different ideas, he would sponsor dubious people, like the alchemist Edward Kelley and the astrologer John Dee.

According to some reports, Kelley (or Dee) brought the book to Rudolf’s court, claiming the manuscript had been written by Roger Bacon, the 13th century experimental scientist with a reputation for dealing in alchemy, although there is no proof for that. In any event, Kelley (or Dee) is reported to have sold the book to Rudolf for an amount that in today’s dollars would be about $100,000.

Rudolf in turn is reported to have given the manuscript to his physician and head gardener, Jacobus Horcicky de Tepenec (also known as Jacobus Sinapius), a transfer that is recorded on the book, but only legible when read with ultraviolet light. Jacobus died in 1622, and It is uncertain when or how Baresch obtained the text.

In any event, after the 1666 letter to Kircher, the book disappeared for 250 years, only to resurface again in 1912 when Wilfrid Voynich bought it, along with 30 other manuscripts, from the Jesuit Collegio Romano. Scholars believe the Jesuits had acquired Kircher’s library after his death, and that the book sat in obscurity during the interim.

Voynich did little with the manuscript, and upon his widow’s death in 1960, her friend, Anne Nill, inherited it; a capitalist, Nill sold the manuscript to Hans P. Kraus in 1961. Kraus gave up trying to sell a book no one could read and donated it to Yale University in 1969. It currently resides there, in the Beinecke Library.

Over the years, several theories, but no definitive answers, have been proposed as to who wrote the manuscript.

Both Marci and Wilfrid Voynich thought the book was written by Roger Bacon in the 13th century; this has never been confirmed, and most date the origins of the book to well-after Bacon’s death.

It has been suggested that Rudolf’s doctor, Jacobus, who was also a noted botanist, wrote the manuscript; this has been discredited by the discovery of his verified signature, which does not match the writing in the book.

Another proposed author was the diplomat, lawyer and cryptographer, Raphael Sobiehrd-Mnishovsky. It is rumored that he claimed to have written an indecipherable code long before Baresch wrote to Kircher, and he was friends with Marci; in fact, he is credited with telling him the story of how Rudolf came by the manuscript.

The Renaissance architect, Antonio Averlino, has also been suggested as a possible author. This theory holds that Averlino prepared the manuscript as a way to sneak otherwise banned scientific content into Constantinople.

Contrarily, some believe it was a hoax. Many have been accused, including both Dee and Kelley; notably, Edward Kelley had been found guilty of forgery at one time and had his ears cut off.  It has also been proposed that Marci fabricated the manuscript, and ensnared Kircher, as part of an academic/political war that had been raging between more secular-minded scholars and the Catholic Church at the time. Others think Voynich forged the manuscript. As a rare book dealer, he had access to ancient vellum and ink and could easily have written the script.

In 2013, after an exhaustive analysis of linguistic patterns in the manuscript, scholars determined that, given the text’s organizational structure and the frequency and location of both content-bearing and structural and functional words, the Voynich is likely not a hoax. As the authors noted, “While the mystery of origins and meaning of the text remain to be solved, the accumulated evidence about organization at different levels, limits severely the scope of the hoax hypothesis and suggests the presence of a genuine linguistic structure.”

Expand for Further References not linked above