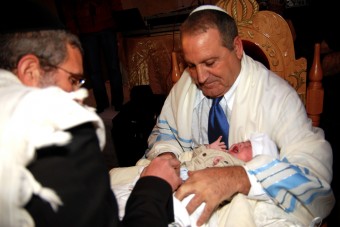 Having served variously as a mark of virility, servility and gentility, circumcision has throughout the centuries worn many symbolic hats. While anthropologists disagree as to the definitive origins of circumcision, the earliest hard evidence comes from the first ancient Egyptian mummies of considerable vintage, around 2300 BC. That being said, Egyptian paintings date circumcision to centuries prior, depicting ritual circumcision as prerequisite to entering the priesthood.

Contention remains as to whether circumcision was a sign of pride rather than prejudice among the ancient Egyptian world. While popular among the elite, forced circumcision was inflicted on captured Phoenician and Jewish slaves as a badge of dishonor, more practical, or rather, less lethal than castration.

Whatever its initial origins, by 1800 BC the Jews were practicing circumcision for religious reasons, in deference to God’s religious injunction to Abraham as contained in the Torah.

Though the religious reasons have remained ostensibly the same for thousands of years, the procedure has changed rather sharply. The original practice, milah, was abbreviated to only the removal of the tip of the foreskin. The decision to snip beyond the tip lay in the cultural collision between Greco-Roman and Jewish cultures. While the Jews considered circumcision among matters theistic, the Greeks regarded it as an aesthetic faux pas. As Hellenic culture became the fashion throughout the Roman Empire, Jews seeking to avoid discrimination and compete in Roman games sought to emulate their hosts by stretching the foreskin and tying it closed.  However, Jewish Elders, rather unsympathetic to the “when in Rome” justification of the blasphemous procedure, instated the Brit Peri’ah around 140 AD. With this, the circumcision procedure now included removing the foreskin to beyond the ridge of the glans, ensuring all Jews would be fully shorn of Roman identity.

With circumcision having assumed a distinctly Jewish connotation, it became grounds for anti-Semitic discrimination. History is littered with examples, such as the Seleucid King Antiochus, occupying Jerusalem in 169 BC, who made the Brit Peri’ah punishable by death. The Roman author Suetonius records court proceedings, wherein a 90 year old man, suspected of evading the Fiscus Judaicus, or Jewish tax, was stripped naked for what must have been the Roman take on strict scrutiny.

After 50 BC, circumcision remained, at least popularly speaking, a largely Jewish affair, until controversy ignited among early Christians. It was yet unclear whether the Gospel required circumcision among converts, which would thus restrict Christianity to Jews or Gentiles willing to undergo the procedure. Ultimately, it was decided that circumcision was not prerequisite to conversion, and the Catholic Church maintained a degree of hostility towards the practice which would set the tone for circumcision until the 19th century.

The Greco-Roman aversion towards circumcision, once heavily salted with anti-Semitism, persisted long after unruly Gauls had overrun the empire. Indeed, by the time Britain had matured to imperial status, explorers who had been busily exporting British commerce and colonialism returned with salacious tales about the barbaric tribes that lay at the extremities of empire, and the varieties of circumcision practiced within. Sir Richard Burton wrote of one such procedure that, “tears off the epidermis from the cuts [around the groin] and flays the testicles and penis, ending with amputation of the foreskin.”

Certain Islamic peoples, such as those of the Moghul Empire, introduced the British to circumcision in a rather more unceremonious fashion: claiming the foreskins of vanquished British troops, willy-nilly on the battlefield. Despite the initial close shaves between the British and other cultures, they eventually spearheaded a change in attitude about circumcision.

Partially inspired by a sense of cultural cosmopolitanism, or fear of troops losing their heads under threat of battlefield circumcision, the British began a revival of circumcision. The social and hygienic virtues of circumcision were well entrenched during the Victorian Era, with British Royalty beginning a practice of circumcising their heirs, the peerage following suit, and the change in attitudes radiating downwards through British society and empire.

This is not to say that the religious element of circumcisions subsided. Indeed, during both World Wars the political and racial subtext of circumcision reemerged with bloody consequence. Forced circumcision accompanied the massacre of Armenians under the Ottoman Empire, while circumcision served again as a potentially lethal marker of Jewish identity under Nazi Germany.

Even within largely circumcised populations, health debates rage. Critics of circumcision cite an absence of evidence vis-à-vis the supposed health benefits of circumcision, and list a litany of disadvantages, such as pain to the child, infection, urinary complications, enhanced risk of disease, and in extremely rare cases even death from complications due to the circumcision (1 in 500,000 or about 8 babies per year in the U.S. die as a result of this procedure). Defenders of the practice, which includes the American Academy of Pediatrics, however claim that the health benefits outweigh the risks to the minority. They cite greater immunity from sexually transmitted diseases and genital cancer as well as the avoidance of certain general hygiene problems. These debates have been exacerbated by religious and antireligious camps among the medical community, with the surgical soundness of some procedures, such as the (rarely practiced today) orthodox Judaic tradition of sucking to stem the bleeding (metzitzah b’peh), being called into question.

To compound the issue, men do not have a monopoly as beneficiaries or victims of this surgical procedure.  Female circumcision or female genital mutilation (FGM) which involves partial or complete removal of the external female genitalia has been around for centuries. Again, Egypt features as the setting for this operation with the Greek geographer Strabo who visited around 25 B.C. corroborating the records, as well as writings of other observers.  However, physical evidence is lacking so the actual origin remains a mystery. One medical historian concedes there is no way of knowing as the ritual was widespread across many cultures from Australian Aborigine tribes to various African societies.

Like many who support male circumcision, cultural, religious, mythical, medical and even aesthetic motives are offered as justification. So devoted are some advocates of female circumcision that in 1930, the future Kenyan Prime Minister explained that the procedure was integral to the survival of Kenya’s ethnic institution.  Later in the mid 1950s, when clitoridectomy was banned, young Kenyan girls even colluded with friends to perform the procedure on each other.

Despite FGM advocates, the practice grew to be viewed by its detractors as barbaric and the outcry against it has been gaining in steam since the 1960s. While the debate over the health benefits of male circumcision has kept it in the good graces of some medical institutions, the World Health organization has denounced FGM as having no health benefit and the United Nations passed a resolution encouraging countries to abandon the practice. Bans have been implemented in several African and Western countries like Kenya (2001), Egypt (2007), Sweden (1982), the United Kingdom (1987) and the United States (1992).

Despite the cut and thrust of circumcision politics, male circumcision will almost certainly remain a point of pride and tradition primarily for religious reasons, but also on a much lesser scale for aesthetic reasons; a viewpoint poignantly represented by the character of Elayne on Seinfeld, when she said of seeing an uncircumcised penis, “It had no face, no personality. It was like a Martian.”

Today male circumcision still remains overwhelmingly popular in Israel, as well as in the Middle East and North African- countries where it seems to have originated; but in Western countries the procedure is declining rapidly, with some predicting an increase in the spread of disease as a result, though many think those concerns are wildly overblown. As to female circumcision, remarkably the data indicates that it is on the rise among the immigrant population in the West.