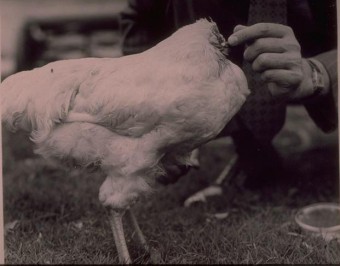 Image Courtesy of miketheheadlesschicken.org and the City of Fruita

It turns out it’s not just politicians that can live without brains, a chicken named Mike lived without his entire head for 18 months!

Mike the Headless Chicken was a Wyandotte chicken that was beheaded for the sake of providing a chicken dinner for the mother-in-law of a Fruita, CO farmer, on April 1945. Fortunately for Mike (or unfortunately depending on how you look at it) Lloyd Olsen’s axe barely missed the jugular vein, and left an ear and the majority of the bird’s brain stem unharmed.

Unlike other chickens that run around like, well, chickens with their heads cut off, who are dead ducks, or chickens as it were, Mike shook off the blow and went about being a chicken, “pecking” with his neck in the absence of his head and continuing to preen himself. Olsen sat down to wait for the bird to die, but when he made no signs of doing so, Olsen decided to have something different for dinner that night and took to caring for the bird. He fed him things like milk and water through his open esophagus using an eyedropper. Small bits of gravel were also dropped down his throat to help his gizzard grind food.

Mike was initially able to walk but somewhat unsteadily. He soon got used to the situation and his new center of gravity. He could no longer crow, but instead made a gurgling noise.

Farmer Olsen took Mike to the University of Utah in Salt Lake City to be studied and the word got out about the headless bird. He was photographed for all of the big magazines and papers of the day, including Time and Life, and started a career as a sideshow attraction, traveling with other marvels such as a two-headed calf. He also traveled with a chicken head in a glass jar that was passed off as his. Mike’s real head was allegedly eaten by a cat and the traveling head was from another chicken, pickled to enhance Mike’s display.

At the pinnacle of his show business career, Mike was making his owners $4,500 per month (about $56,000 today). Admission to see the bird cost 25 cents, which added up to a lot of curious people. Unfortunately for chickens all over the country, Mike’s popularity lead to a string of people trying to behead their birds in just the same way. One of the copycat beheaded chickens lived for eleven days, but the rest died quickly.

Like many other celebrities, Mike choked to death in a motel room. One problem Mike often experienced was that he would choke on his own mucus. The Olsens kept syringes on hand for when this happened, to suck the mucus out. But, one night Mike was roosting with the Olsens in a Phoenix motel room between sideshow exhibits. The Olsen’s heard him choking in the middle of the night but couldn’t find a syringe to save him!

A subsequent autopsy revealed that the axe had not touched the bird’s carotid artery and Mike’s blood had quickly clotted, saving him from bleeding to death. Because most basic body functions like breathing and heart-rate, as well as most of a chicken’s reflex actions, are controlled by the brain stem, Mike remained able to function and otherwise healthy for 18 months after losing his head.

Mike may be gone, but he’s far from forgotten. At least in his hometown of Fuita anyway. The town hosts an annual “Mike the Headless Chicken Day,” the third weekend in May. Events include a 5K “Run Like a Headless Chicken Race,” games of “Pin the Head on the Chicken,” an egg toss, and “Chicken Bingo,” in which chickens are set loose in a numbered grid to do their business. Where they leave their droppings determines the numbers that are called… If extraterrestrials are watching us, it’s no wonder they haven’t bothered to make contact.

As they say on the official “Mike the Headless Chicken” website, “Mike’s will to live remains an inspiration. It is a great comfort to know you can live a normal life, even after you have lost your mind.”