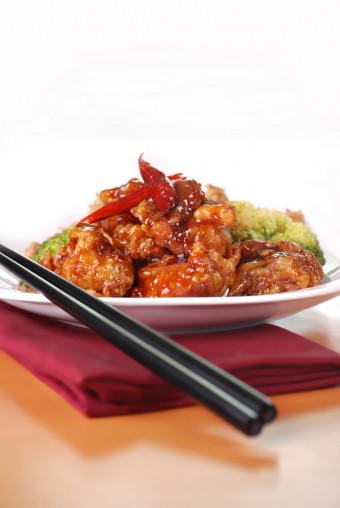 Most of us know the name “General Tso” from the delicious and ubiquitous chicken dish available from Chinese restaurants across the United States. Yet, before Americans were introduced to tangy, spicy, saucy Chinese fried chicken, there was a powerful general and respected leader that helped run China.

Born on November 10, 1812 in Wenjialong in Hunan province, early in life, Zuo Zongtang (Tso Tsung-t’ang in the Wade-Giles Romanization system) had hoped to become a civil servant. He studied Western culture, science and political economy, but he repeatedly failed the civil servant exam. At one point, he even considered pursuing the quiet life as a silkworm farmer for his livelihood.

He rallied, and eventually found work as an adviser to the governor of Hunan in 1850 when the Taiping Rebellion began. Ten years into the civil war, Zuo was awarded command of the Xiang Army of volunteers with which he successfully pushed rebel forces from the Hunan and Guangxi provinces, eventually pursuing the rebels into the Fujian and Guangdong provinces. In 1863, he was given a position as an undersecretary of war and appointed governor of Zhejiang province. In 1864, along with another, he ended the rebellion when they successfully unseated the rebel king.

By the 1870s, armed with Western weapons, General Tso, as he was known in the West, had suppressed the Nian Rebellion, as well as revolts and uprisings throughout northwestern China. In 1878, he drove back the Russians as they attempted to occupy portions of Xinjiang province.

Toward the end of his life, he was appointed to a high-ranking position during the Sino-French war, and died in 1885, after the truce was signed.

Etymology of the Dish

After General Tso’s death, China was torn by war and revolution. By 1949, the Nationalist government was about to be overthrown by the communists and Mao Zedong. Many Nationalists fled to Taiwan; among them was a renowned chef, Peng Chang-kuei (C.K. Peng).

Peng invented the eponymous dish in Taiwan in the 1950s. As he noted, “General Tso’s chicken did not preexist in Hunanese cuisine, but originally the flavors of the dish were typically Hunanese – heavy, sour, hot and salty.” Peng moved, with his delicious recipe, to New York in 1973 where he introduced the United States to Hunan cooking, adapted to American palates with the addition of sugar.

Peng moved back to Taipei in the 1990s, and when he serves the dish in his restaurant there, it is sans sugar.

Although Peng’s recipe is delicious, when I want an authentically inauthentic dish of General Tso’s, it had better have at least a pinch of sugar. Here’s an excellent recipe from Tyler Florence:

Put the chicken and all of the marinade ingredients into a bowl and mix well to combine. Cover and set in the fridge for at least 30 minutes.

Separately, heat in a deep skillet or wok, 2 inches deep of peanut oil to 375F.  In a large bowl, mix the egg, ½ cup cornstarch, ½ cup water and sesame oil with salt and pepper to taste.

Coat the marinated chicken with the batter in small batches, and cook the pieces until each is browned and crisp, 4-5 minutes. Drain well. Repeat until all of the chicken is cooked.

Remove all but 2 TBL of the oil from the pan and add, over high heat, chilies, scallion, garlic, ginger and orange zest. Sautee, stirring constantly for one minute, then add soy sauce, chicken stock, vinegar and honey. Bring it to a boil. In a small cup, mix the remaining 2 TBL of cornstarch with 2 TBL cold water. Add it to the boiling sauce, one half at a time. Cook for a bit until the sauce thickens. Add the chicken back to the pan until warmed through. Garnish and serve over white rice.

Expand for Further References not Linked Above