Famed Bankrobber John Dillinger Once was a Professional Baseball Player 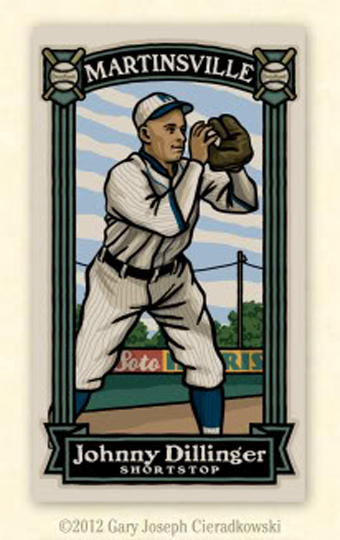 One of the many things I love about baseball is how many people that you know of, for an entirely different reason, happen to also have been ball players. President George Bush played in the first two College World Series’ and kept a well-oiled first baseman’s mitt in his desk in the Oval Office, just in case. Dwight Eisenhower played minor league ball in Kansas. Actor Kurt Russell played in the minor leagues before an injury ended his career.  Writer Jack Kerouac was a star ballplayer in high school and college and even invented his own fantasy baseball game.  I love highlighting these guys because it makes them more human – baseball has that effect on people, a great equalizer. How many fathers and sons, with nothing in common due to differing generations, found a language they both understood in baseball. Think back at the times you’ve sat in a bar or holiday party or on a plane and was able to have a conversation with a complete stranger due to your mutual interest in our national pastime? Which brings me to this story.

Everyone has heard of the infamous bank robber John Dillinger – his jaunty Clark Gable mustache, daring escapes from jail, the “Lady in Red” turning him in to the G-Men, his death in a hail of bullets outside the Biograph Theatre in Chicago – he’s one of those bad guys that are uniquely American, totally ruthless and misguided, but so easy to find yourself rooting for. It’s a dangerous thing, pulling for the bad guy, but boy, does it ever make a crook like Dillinger more interesting when you find out he was a crack ballplayer in his youth and how the game actually had a big role in turning him down the path that led to his bloody demise outside the Biograph Theatre at the age of 31.

Like most red-blooded American boys of the time, young John Dillinger was an avid fan of the national pastime. He followed the Chicago Cubs and in between bullying smaller kids, petty thievery and hard-partying, Dillinger played baseball. His quick speed on his local Indiana sandlots earned him the nickname “The Jackrabbit”. After too many run-ins with the local police, Dillinger enlisted in the U.S. Navy in 1922 but deserted after a few months. He slinked home to his father’s house in Martinsville, Indiana and married a 16 year-old girl named Beryl.

Trying to get his life back on track, Dillinger tried his hand at a few different types of jobs but failed miserably. His marriage to teenage Beryl also started falling apart as well. The only success he seemed to have was on the baseball diamond. His skills were such that local teams paid him to play ball for them and throughout the summer of 1924 the cash-for-play kept he and his young wife afloat. Dillinger’s steady team was the Martinsville Athletics. He was their star shortstop and his team-high batting average earned him a $25 award from the local Old Hickory Furniture Company. Behind the hitting of Johnny Dillinger, the Athletics took the 1924 league championship.

After the season ended, the former shortstop found himself in dire straits with the baseball money drying up. While normal young men would have used their local athletic notoriety as a stepping stone to a respectable career, Dillinger did the opposite. Instead of utilizing the connections he made to pursue honest employment, Dillinger chose to call on a fellow he met on the ball field to launch himself into big leagues of professional crime.

League umpire and low-life criminal Edgar Singleton set up John Dillinger’s first armed robbery. Hopefully Singleton’s arbiter skills were better than his heist-planning because their robbery of an elderly grocery store owner was so badly botched it was almost comical. While Singleton waited in the getaway car, Dillinger attacked the store’s owner with a metal bolt wrapped in a cloth. The strapping young Dillinger got his ass whooped by the old man and during the fight the would-be robber’s gun went off, hitting the old man in the foot. The mastermind and getaway driver lost his nerve and sped off, leaving the beaten Dillinger to hoof it home on his own. To no one’s surprise, both men were quickly apprehended. Now a professional criminal, Dillinger was sentenced to 10 to 20 years in prison, of which he served 9. But again, baseball played a pivotal role in his life.

Prison officials recognized his ball playing skills and he quickly became the star ballplayer on the Indiana State Reformatory ball club. He followed his Cubbies through the newspaper and took part in baseball betting pools. The constant denial of his parole eventually made him bitter. When he was transferred to the much harsher Indiana State Prison in Michigan City he convinced himself it was because the prison wanted him to play shortstop on their team, though some sources say he asked for the move himself. Instead of playing ball when the season came around, Dillinger turned his efforts to learning all he could about honing his criminal skills. With all the hardened thieves and cut-throats in Michigan City, he had no shortage of tutors.

The John Dillinger that emerged from prison in 1933 was now a well-educated criminal. He instantly embarked on a bank robbing tear that both shocked and fascinated the nation. Criss-crossing the country and living constantly on the run, Dillinger still took the time to follow the Cubs. In between robberies, he was said to have attended more than a few ballgames at Wrigley Field. In fact, before one game in August of 1933, the bank robber was pointed out to outfielder Babe Herman as he sat with a group in the left field box seats. The Cubs great catcher Gabby Hartnett told how the Chicago police apparently knew about Dillinger’s presence at Wrigley Field yet did nothing to turn him into the Feds.

The following season he continued to attend games there, especially after he had crude plastic surgery done to alter his easily recognizable face. Hiding out in Chicago, Dillinger went to see the Cubs get edged out by Cincinnati 4-3 on June 8th. In a story that made newspapers nation-wide, he was in the upper deck at the June 26th game as they defeated Brooklyn 5-2. A guy sitting a few seats away named Robert Volk happened to have met Dillinger the year before when he stole a car during a prison getaway. He instantly recognized the arch-criminal and much to his chagrin, the robber recognized him, too. He got up and sat down close to the terrified man. After sitting in awkward silence for a while, Volk turned and said “this is getting to be a habit”, to which the country’s most wanted man replied “it certainly is.” Shaking his hand, Dillinger introduced himself as “Jimmy Lawrence” and departed during the 7th inning stretch. Apparently undaunted by the close call, he returned to Wrigley again a few days later and watched the Pirates get pounded by his Cubbies 12-3.

After the victory over Pittsburgh, the Cubs left on an extended road trip and were still out of town when Dillinger decided to pass the time by catching a movie at the Biograph Theatre. Of course, we all know what happened after that.

You can read more of Gary Cieradkowski’s interesting baseball articles over at The Infinite Baseball Card Set.

If you liked this article you might also enjoy: