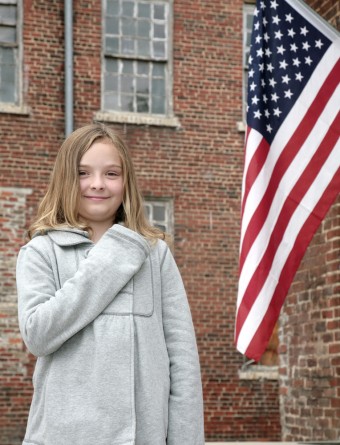 The U.S. Pledge of Allegiance was written by a socialist Baptist minister named Francis Bellamy in 1892. It was published in a popular children’s magazine of the time called The Youth’s Companion as part of the 400th anniversary celebration of Christopher Columbus arriving in the New World.

The celebration itself was the brainchild of James B. Upham, a marketer for the magazine who made it his business to foster a sense of patriotism in the youth of America. Upham’s goal was to, “instill into the minds of our American youth a love for their country and the principles on which it was founded, and create in them an ambition to carry on with the ideals which the early founders wrote into the Constitution…”

Francis Bellamy intended for the Pledge to be brief and to the point. He also was leaning towards using the words “equality” and “fraternity”, but realized that probably wouldn’t fly, knowing the committee members he’d have to get the approval of were against equal rights for all.

Bellamy recalled that when he wrote the Pledge, feelings of patriotism were at an all-time low. He, Upham and their cohorts felt that the place to rekindle feelings of national pride was in the classrooms, so Youth’s Companion came up with a plan to sell flags at cost to public schools through their students. This ploy was so effective that 25,000 schools acquired flags in just one year.

Bellamy and Upham managed to secure the Nation Education Association’s support as a sponsor for the Columbus Day event, and by June 1892 they had convinced Congress and President Harrison to make the public school flag ceremony the highlight of the Columbus Day festivities.

The Pledge was then used in public schools starting on October 12, 1892 to sync with the opening of the World Columbian Exposition going on in Chicago, Illinois.

Here is the original version of the Pledge, which was to undergo four changes over the years:

I pledge allegiance, to my Flag and the Republic for which it stands, one nation indivisible, with liberty and justice for all.

In 1923, the first changes to the text of the Pledge of Allegiance were made, much to the consternation of Francis Bellamy, who thought the new wording completely ruined the flow of his original work. The National Flag conference insisted that the two words “my flag” be replaced with “to the flag of the United States.” This was to prevent any confusion among new immigrants between loyalties to their countries of origin and their new home. The addition of the words “of America” would be tacked on a year later.

It wasn’t until nearly two decades later that the United States Congress first officially recognized The Pledge of Allegiance on June 22, 1942 in the following form:

I pledge allegiance, to the flag, of the United States of America, and to the Republic for which it stands, one Nation indivisible, with liberty and justice for all.

Starting as early as 1948, efforts were being made to add the words “under God” to the Pledge with one of the first to add it being the chaplain of the Board of Governors of the Illinois Society of the Sons of the American Revolution, Louis Bowman. For this,The Daughters of the American Revolution saw fit to present him with an Award of Merit for originating the idea of adding “under God” to the Pledge.

The “under God” movement gathered steam with a resolution drafted by the Knights of Columbus during the Korean War in April of 1951, calling on all members to add “under God” to the Pledge when recited at the opening and close of meetings.

Finally, with the “red scare” at its zenith, legislators were lobbied by religious leaders, the American Legion, and the Hearst newspapers, voicing concern that Communist rhetoric is uncomfortably similar to the Pledge of Allegiance as it was then worded. A bill to add the words “under God” to the Pledge was then introduced to the House and was supported by President Eisenhower, who signed it into law.

After signing it into law, President Eisenhower stated:

In this way we are reaffirming the transcendence of religious faith in America’s heritage and future; in this way we shall constantly strengthen those spiritual weapons which forever will be our country’s most powerful resource in peace and war.

This latest version then reads as follows:

“I pledge allegiance, to the flag, of the United States of America, and to the Republic, for which it stands, one nation, under God, indivisible, with liberty and justice for all.”

Since then, quite a bit of controversy has been stirred with the addition of those two little words. On top of that, over the past decade or two particularly there has been a huge upsurge in the amount of legal action taken pertaining to the appropriateness of children being “encouraged”- read made to- recite the Pledge in school, particularly as most of the kids don’t really understand what they’re saying anyways.  Further, some children that have refused to participate in saying the Pledge, whether because their parents told them not to or they simply chose not to, occasionally have been ridiculed in class by their teachers for their choice- slightly ironical given said teachers are wanting them to recite something that says “liberty… for all” and yet they are trying to take away a piece of the child’s liberty- the right to not say the Pledge. 😉