The Nazi Origin of the Volkswagen Beetle 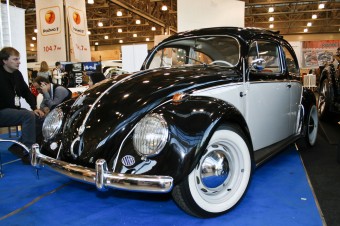 Hard to believe but true- the industrial production of the lovable VW Bug was partially the brainchild of none other than Adolf Hitler. While most of us, when we think of Hitler and the Nazis remember the six million Jews and many, many others killed during the Holocaust, we generally forget that the Nazis were a socialist party committed to improving the lives of (Aryan) workers. The Volkswagen, as the “people’s car,” was seen as one key step in making Germany a workers’ utopia.

Rise of National Socialism in Germany

With its roots in militant, racist nationalism, the National Socialist German Workers (Nazi) Party arose from the political and economic instability suffered by Germans in the early 1920s. The hyperinflation, poor wages and unemployment that marked Germany’s infamous Weimar Republic were caused in large part by war reparations and other Draconian measures demanded by the victors of World War I in the Treaty of Versailles.

Although the German economy enjoyed a period of stability through the mid-1920s, it crashed hard in late 1929 partially as a result of the American stock market crash of that same year. In response, the government adopted strict austerity measures to control inflation including reducing benefits for the unemployed, sick and aging. By 1931, the government’s policies had driven down the price of goods, which led to further reductions in wages and jobs. By 1932, this downward spiral had driven Germany’s workers to the socialist parties that catered to them, including the Nazis. In the elections of that year, the Nazis gained a number of seats to hold a powerful position in the Reichstag (Germany’s legislature); under pressure, Germany’s president appointed Hitler, the leader of the Nazi party, as Chancellor of Germany in 1933.

Inside the Nazi Party

Preaching to the choir, the Nazis evangelized the evils of capitalism and the rights of workers. Party members believed that the nation’s economic woes were the fault of greedy capitalists and, above all, wealthy Jewish financiers who held much of Germany’s debt. To redress the problem, the Nazis proposed a number of measures to improve workers’ lives; known as the Twenty-Five Points, the proposals included the nationalization of industry, benefits for the elderly, land reform, public education reform, an end to child labor, the creation and fostering of a middle class, and the end of high interest money lending, otherwise known as usury. (Of course, a number of the reforms were geared toward disenfranchising the Jews and other “inferior” races, but that’s a subject for a different article).

Once the Nazis had political power, some of the 25 points began to be put into effect through practical programs. The production of the Volkswagen was one of them.

In the 1920s, a number of European carmakers were looking at creating smaller, more affordable cars for average, working class families. One of these, Ferdinand Porsche, designed and built a prototype he named the Volksauto, a predecessor to the Volkswagen.

The Nazis saw the value in equipping the average German family with a car that sat five, could reach respectable speeds and was still affordable for working-class Germans. After being appointed Chancellor, Hitler adopted Porsche’s design for his “people’s car.” Because private industry could not produce the car at the low price Hitler envisioned, he had a factory built to make the cars in 1938. To help workers afford the modest price, a government-sponsored savings program was also administered.

At this factory, on May 26, 1938, Hitler said in a speech about the car that would be produced there:

Hence, I believe there is only one name that can be given to this car, a name I shall give to it on this very evening. It shall bear the name of that organization that strives to instill both joy and strength in the masses. The name shall be: “Strength through Joy Car”! (Kraft durch Freude-Wagen)

Unfortunately, war broke out (or perhaps more accurately was waged), and the state-owned plant stopped making the people’s cars and switched to producing military vehicles.

Just before the war, Porsche was having trouble with the fact that his new people’s car violated quite a lot of patents from the Czechoslovakian car company Tatra, who’d built a very similar car already.  Porsche agreed to pay Tatra a settlement for the infringements, but Hitler intervened and told Porsche he’d “solve his problem” for him.  Needless to say, Tatra wasn’t happy about not getting paid, but this ultimately was a moot point as Germany shortly thereafter invaded Czechoslovakia and took over management of Tatra and its factory.  Eventually Volkswagen did finally settle out of court with Tatra in 1961 for the patent violations.

After the war, the factory eventually went back to making cars and production soon ramped up. Volkswagen’s iconic former “people’s car” or as it was actually called- the Type 1 (the official name for the Beetle)- quickly became a favorite in North America, and by 1972, over 15 million had been sold. By the time the last Love Bug was taken off the line in 2003, over 21 million of these efficient and relatively inexpensive beetles had been produced.