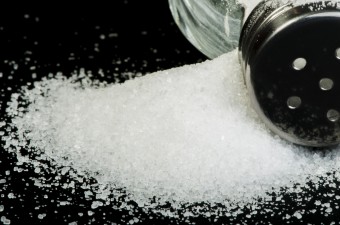 Most people are familiar with the “Morton”s Salt girl“. With her bright yellow dress, oversized umbrella, and leaking container of table salt, she’s an iconic figure in American grocery stores. But who is the Morton’s girl, and where did she come from?

The Morton’s story begins in the 1880s, when a man named Joy Morton invested in a Chicago-based salt company. Salt was big business in those days, largely fueled by the demand of the explorers and pioneers who were settling the American West.  In fact, while salt sells for just a few dollars a pound at most grocery stores these days, it wasn’t always so easy to come by back then. Salt is a critical component of any diet and throughout history has been critical to certain types of food preservation. Perhaps not surprisingly from that, evidence of early human settlements are often found near sources of salt. Struggles over salt have led to war in many cases – in fact, it was the subject of skirmishes between the British and the colonists during the American Revolution. One factor that persuaded Thomas Jefferson to launch the Lewis and Clark expedition was the rumor that a great salt mountain could be found near the Missouri River.

Given the importance of salt, it’s no surprise that Joy Morton’s little company thrived along with the growing country. As the business grew, he bought out his partners. By 1910, he owned a large enough stake to re-brand it in his name – the Morton Salt Company.

At about this time, Morton’s company was also trying to solve a persistent problem. Salt is “hygroscopic”, a physical property that causes it to absorb water from the air around it. When water is absorbed, the salt tends to clump – an inconvenient property for bakers and diners. If you try to put the salt from those days in a shaker and sprinkle it over your French fries, you wouldn’t have much success.

Morton and his team solved this problem in 1911 by adding an anti-caking agent, magnesium carbonate, to their product. They also put the salt in a cylindrical package that helped keep water out. The result was a free-flowing salt that wouldn’t frustrate customers.  Morton was pleased with his innovation, but still he faced another issue. Now that his salt came in a new and improved form, he needed to spread this information to his customers. How could he get the word out to customers that Morton salt was the brand for them?

Morton hired advertising agency N.W. Ayer and Company to put together a marketing campaign that would promote the anti-caking properties of his salt. The ad team came up with a long list of marketing plans. They pitched their most promising concepts to the salt company’s executives, but it was Morton’s son who saw genius in one of the throwaway ideas – a little umbrella-wielding girl, accidentally pouring salt in the rain.

The illustration epitomized wholesomeness and innocence. It also demonstrated the value of Morton salt – it will pour easily, even if you’re standing in a rainstorm. The company paraphrased an old adage for the accompanying catchphrase: “When it rains it pours.” The ad debuted in Good Housekeeping magazine in 1914.

In the years since, Morton’s little girl hasn’t aged more than a few years, but she has made some changes to keep up with the times. The first makeover came in 1921, when her hairdresser changed her blonde mop to straight, dark hair. In 1933 – as Shirley Temple’s career as a child actress took off – she co-opted the child star’s trademark curls.

Today, the Morton Salt Company adorns its packages with the sixth version of the umbrella girl – the one with the yellow dress and a daydreaming gaze that evokes the spirit of 1968, the year she debuted. Despite frequent questioning from fans and customers, Morton Salt Company maintains that she is simply the creation of an ad-maker’s imagination – there is no real girl behind the iconic image.