February 6, 2013 Scott
(Editor’s note: this is a continuation of the “Top 5 First Aid Tricks Everyone Should Know” series written by our resident paramedic/firefighter, Scott. For the other parts of this series: Part 1: Direct Pressure; Part 2: Temperature Control; Part 3: Recovery Position; and Part 5: Defibrillation) 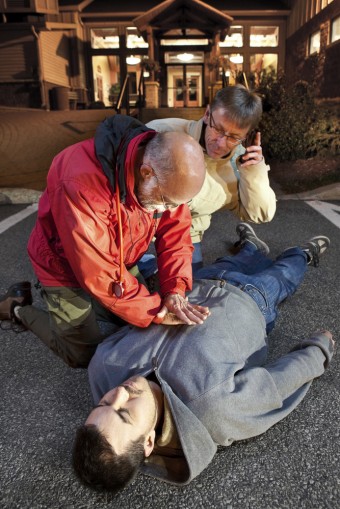 Coming in at #2 on our top 5 first aid tricks everyone should know list is CPR. This one seems obvious, but no first aid trick countdown should be without it. As the science behind resuscitation has become more advanced, the studies behind the techniques used have become more focused. The result has left CPR the most valuable asset in resuscitation. The technique itself has become so easy, just about anyone who can push on a chest can do it.

383,000 cardiac arrests happen outside of the hospital every year in the United States. (Note: “cardiac arrest” and “heart attack” are not the same thing, more in the Bonus Facts below.) 88% of the cardiac arrests happen at home. This means that this first aid trick will most likely be performed on someone you know. If you don’t perform it, the person will have nearly 100% chance of dying before emergency aid can arrive. So knowing how to perform CPR can become very personal. No worries though. It’s extremely easy!

If you are familiar with CPR, in the past you had to remember things like 15 compressions to 2 breaths, tilting heads back, jaw thrusts, 2 ½ inch compression depth for adults, 1 inch for infants, checking pulses in the right places, etc. Good news- it’s not nearly that complicated anymore.  There’s very little to remember now.

In 2010, ILCOR (International Liaison Committee on Resuscitation), reviewed hundreds of studies and found that breathing just wasn’t necessary for people when doing CPR, even for advanced medical personnel, like paramedics and doctors. They also found checking for a pulse just wasn’t as important as once thought. Instead, the lay person just needed to know two things in this circumstance: is the person unconscious and are they breathing normally. If not, start CPR. In the end, all a person needed to know was how to do compressions.

This extreme shift from a lay person not needing to necessarily give breaths and not checking for pulses might on the surface seem strange. After all, brain cells need oxygen to maintain aerobic metabolism. If not, they go into what is known as anaerobic metabolism. The result is those cells becoming more acidic over time. After 4-6 minutes of this, your cells begins to die, and after about 10-16 minutes they will be totally dead (there are exceptions to this rule, like in the case of hypothermia, but this is still the average).

So why not breathe for them? What ILCOR found was, at the moment someone goes into cardiac arrest, the brain is still trying to function, only with a less than adequate oxygen capacity. The breathing centers of the brain, specifically the medulla oblongata and the pons region, continue to send signals to the diaphragm in an attempt to keep respiration going. The end result is a breathing rate known as agonal respiration. While this type of breathing isn’t sufficient to maintain appropriate oxygen levels in someone’s blood for long, it still allows for some exchange of oxygen and carbon dioxide within the lungs.

At the moment of cardiac arrest, there is also an adequate amount of oxygen in the blood to maintain metabolism within the brain for a few minutes. A person’s metabolism will naturally use up this available oxygen over time, but combined with agonal respiration, the result is, there can be enough oxygen within the bloodstream that breathing isn’t necessary. Unfortunately, the exact amount of time where breathing isn’t necessary isn’t precisely known, varying from study to study. However, ILCOR looked at studies using different ventilation to compression ratios, from 15 compressions to 2 breaths, all the way up to 100 compressions to 1 breath, and even no breathing and only compressions. While every study had differing numbers of survival, the trend was always the same. The least amount of interruption in compressions, even for breathing, the better chance the person had of surviving.

When paramedics or doctors show up, they too only focus on compressions. Breathing has now become almost an afterthought- something that’s only done after you have enough people to perform chest compressions and put a defibrillator to use. Once that’s the case, breathing is then addressed. When breathing is addressed, and a tube is placed down the person’s trachea, at no point will chest compressions ever be stopped for the sake of breathing.

Pulse checks are also out. The numerous studies found that a lay person checking for a pulse will take as much as 2 minutes to try and find it- 2 very valuable minutes when you could be doing compressions! The reason seemed to be that people are inexperience with checking for pulses, and then wanting to “make absolutely sure” the person didn’t have a pulse. In all the cases, the people without pulses were unconscious and weren’t breathing normally. The conclusion was that it’s much easier to make sure the person is unconscious and it’s easy to know if they aren’t breathing normally. Even for advanced medical professionals, it’s not recommended to try and check for a pulse longer than 10 seconds.

The compression depth has also become easy, while the American Heart Association (AHA) still recommends 2 ½ inches for adults, 2 inches for children and 1 ½ inches for infants, the rule of thumb has now become: 1/3 the width of their torso. This is convenient because, unless you’re a contractor, you probably won’t have a tape measure with you when someone has a cardiac arrest.

Compressions is now the only thing you should really know. How do you perform them? Simple. Bare the person’s chest. Place your hands on the lower half of the breast bone (the sternum). Push to a depth of 1/3 the width of their body at a rate of at least 100 times per minute (sing “staying alive” by the Bee Gees. Push to the beat). Make sure you come all the way up after you compress.

Why do more compressions and less breathing work so well? There is a minimum blood pressure that one needs to supply the brain with blood. The heart does this very well by squeezing blood out with every beat. When it’s not working, we need to compress it to squeeze that blood out. Numerous studies have shown that it takes about 10 chest compressions in a row to create enough “pressure” to get blood to the brain. The minute you stop chest compressions, like when you’re giving someone breaths, the blood pressure goes almost immediately back to 0. If you go back to a pressure of 0, the brain cells are no longer exchanging oxygen, carbon dioxide and other nutrients and are once again dying. It then will take another 10 compressions to get the pressure up again. The end result is a long period of time that the brain is not getting blood when you stop compressions. It then becomes more important to maintain that pressure through compressions than performing just about any other treatment when someone’s heart has stopped.

Due to all of these factors, CPR is now very easy. Make sure the victim is unconscious. Check to see if they are breathing normally, if not, start compressions. Do compressions. Bam! You’re now performing CPR!

How much will this help? According to the AHA, immediate CPR for someone in cardiac arrest will increase their chance of survival by 300%. Yes, 300%! When it comes to first aid, usually the tricks and treatments used will only help the victim’s chance of a full recovery. Withholding that treatment will not necessarily mean the person’s demise. CPR is not one of those treatments. When a person is in cardiac arrest, if you do nothing, they will very likely die. If you perform this trick, they have triple the chance of surviving. In this situation, CPR is one of the only first aid tricks that will save their life. Because of this, and because it has become so easy to do, CPR makes it to #2 on our Top 5 First Aid Tricks Everyone Should Know list.