Why Do Mentos and Diet Coke React?

November 16, 2012 Daven Hiskey
Steph B. asks: Why do Diet Coke and Mentos react with each other? 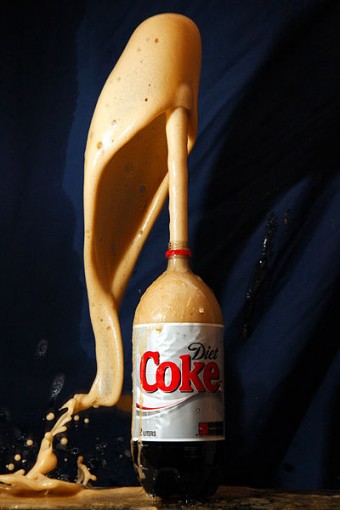 If you’ve ever wondered why Diet Coke and Mentos react so strongly to one another, well, wonder no more.

To start, it should be noted that it’s not just Diet Coke and Mentos that “react”; other carbonated beverages will also readily respond to the addition of Mentos.  What’s going on here is that Mentos has thousands of small pores on its surface disrupting the polar attractions between the water molecules, creating thousands of ideal nucleation sites for the gas molecules in the drink to congregate. In non-sciency terms, basically, this porous surface creates a lot of bubble growth sites, allowing the carbon dioxide bubbles to rapidly form on the surface of the Mentos.  If you use a smooth surfaced Mentos, you won’t get nearly the reaction.

The buoyancy of the bubbles and their growth in size will quickly cause the bubbles to leave the nucleation site and rise to the surface of the soda.  Bubbles will continue to form on the porous surface and the process will repeat, creating a nice foamy result.

As to why diet sodas like Diet Coke produce such a bigger reaction, it’s because aspartame lowers the surface tension of the liquid much more than sugar or corn syrup will.  You can also increase the effect by adding more surfactants to the soda before you add the Mentos, like adding a mixture of dishwasher soap and water.

Another factor contributing to the size of the geyser is how rapidly the object causing the foaming sinks in the soda.  The faster it sinks, the faster the reaction can happen, and faster reaction =  bigger geyser; slower reaction may release the same amount of foam overall, but also a much smaller geyser.  This is another reason Mentos works so much better than other similar confectioneries.  Mentos are fairly dense objects and so tend to sink rapidly in the liquid.  If you crush the Mentos, so it doesn’t sink much at all, you won’t get nearly the dramatic reaction.

Yet another factor that can affect the size of the Mentos / Coke geyser is the temperature of the soda itself. The higher the temperature, the bigger the geyser due to gases being less soluble in liquids with a higher temperature.  So, basically, they are more “ready” to escape the liquid, resulting in a faster reaction.

Note that while caffeine is often cited as something that will increase the explosive reaction with the soda, this is not actually the case, at least not given the relatively small amount of caffeine found in a typical 2-liter bottle of soda generally used for these sorts of Diet Coke and Mentos reactions.  If you add enough caffeine, you will see a difference, but the levels required here to see a significant difference are on the order of the amount that would kill you if you actually consumed the beverage. (See: How Much Caffeine Would It Take to Kill You)

You’ll also sometimes read that the acidity of the soda is a major factor in the resulting geyser.  This is not the case either.  In fact, the level of acidity in the Coke before and after the Mentos geyser does not change, negating the possibility of an acid-based reaction (though you can make such an acid based reaction using baking soda).