This Day In History: November 25

On this day in history, November 25th… 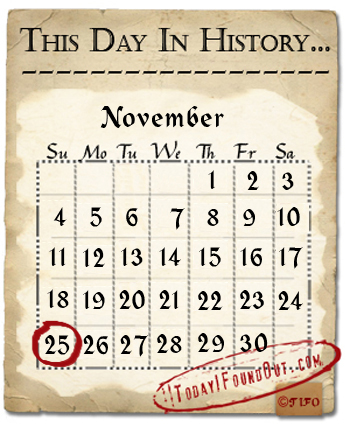 1926 : An outbreak of 27 twisters rip up the Midwest in one of the worst tornado storms in U.S history. The strongest of these tornadoes was an estimated F4 that tore up Herber Springs, Arkansas. The storm caused over 76 deaths, 51 of which were in Arkansas alone and over 400 injuries in all.

1952: Novelist and playwright, Agatha Christie’s murder-mystery play titled “The Mousetrap” premiered at the Ambassadors Theatre in London. Christie, who was already a widely successful novelist, had originally written a short 30-minute radio play called “Three Blind Mice”, for Queen Mary (wife of late King George V) on her 80th birthday in 1947. She later made an extended version of the same play and titled it “The Mousetrap”, in reference to the play-within-a-play performed in William Shakespeare’s “Hamlet.” Taking place at the “Monkswell Manor”, the murder mystery unfolds when a group of guests are snowed in and realize that a murderer on the loose is among them. The play first debuted with the actor Richard Attenborough and his wife Sheila Sim in the lead roles and opened for an audience of about 453 people. It ran for almost 9,000 shows until 1974, after which the play was moved to St. Martin’s Theatre, where it still shows today. It is considered the longest continuously-running play in history. Over 300 actors and actresses have appeared in the roles of the eight characters, with actor David Raven even making it into the “Guinness Book Of World Records” as the world’s most durable actor, for the 4,575 performances he did as “Major Metcalf” in the play.

1963 : The 35th President of the United States, John F. Kennedy, received a “full military honors” service as he was buried at the Arlington National Cemetery in Virginia. Assassinated three days earlier on November 22, 1963, the President’s last rites and burial took place on November 25th which was also his son’s 3rd birthday. Declared as a national day of mourning, hundreds of thousands of people lined the streets of Washington to watch the funeral procession and pay their respects. The slain President’s flag-draped casket was transported in a horse-drawn caisson that started from the Capitol Rotunda to St. Matthew’s Catholic Cathedral for a funeral Mass service. The requiem Mass was followed by a solemn procession to the Arlington National Cemetery, where leaders of almost 99 nations gathered for the state funeral. His widow Jackie Kennedy lit an “eternal” flame over his grave.