This Day In History: November 26

On this day in history, November 26th… 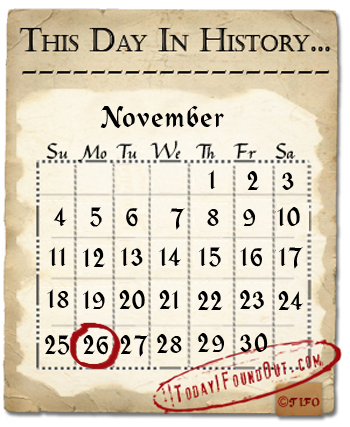 1842: The University of Notre Dame was founded by Father Edward Sorin.  He also became the University’s first President. The University’s name “Notre Dame” is French for “Our Lady,” being a catholic school, the term “Our Lady” is a reference to the Virgin Mary. When the University was first founded, it was an all male institution until 1972 when the University first started enrolling women. Today, almost half of the student body are women.  The University is split into 5 colleges and one professional school and has several sporting teams including their football team “The Fighting Irish”, that has won eleven championships, seven Heisman trophy winners, and has had sixty two member inducted into the college football hall of fame.

1922: British archaeologist, Howard Carter, (discoverer of the steps to the entrance of King Tutankhamen’s Tomb on November 4th, 1922) finally enter the tomb after 18 days of excavation. When they first found the door to the antechamber of Tutankhamen’s tomb, they feared they had discovered yet another pillaged tomb. But they instead found the room was so undisturbed that it even bore footprints of the tomb builders who left the room more than 3,000 years before.  From this point on, the massive excavation of the 4- room tomb started to unfold revealing the nearly intact tomb of the Pharoah with his mummified remains inside a solid gold coffin nested within a stone sarcophagus.

1942: One of the most beloved Hollywood movies in history, “Casablanca“, first premiered in New York. The World War II-era drama starring Humphrey Bogart and Ingrid Bergman, was based on a then-unproduced play titled ‘Everybody Comes to Rick’s‘  by Murray Burnett and Joan Alison. Directed by Michael Curtiz, the movie had its first showing at the Hollywood Theater in New York City. Over the next ten weeks, the film grossed $255,000 in that theater alone and went on to be released across the country on January 23, 1943. Although it was not a smashing success at the box-office initially, the film has grown in popularity over the years and has made a lasting impact on the Hollywood industry.

2002: President George W. Bush issues a Presidential pardon to a turkey as part of an annual Thanksgiving tradition  at the White House. In 1942, the National Turkey Foundation first started a Thanksgiving tradition by presenting Thanksgiving turkeys (one live turkey and 2 dressed turkeys) to President Harry S. Truman. Mostly the Presidents would either eat the birds presented to them or in some cases they spared the bird’s life and donated the bird to various farms or places. However, in 1989  President George H. W. Bush (Sr.) first formally introduced the tradition of offering a turkey a Presidential pardon after which they were sent to a farm (initially the Frying Pan Park in Fairfax County, Virginia, kept the birds but then they began sending them to Disneyland in California or to The Walt Disney World in Florida) to live out the rest of their days. The Turkeys are often named by a poll conducted of the general public through the White House’ website. The first female turkey named ‘Katie’ was pardoned by Bush Jr. on the 26th of November 2002 along with the alternate bird ‘Zack’.