On this day in history, November 24th… 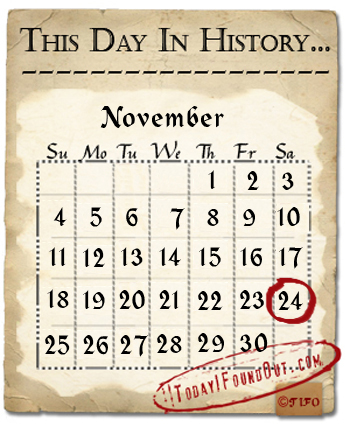 1859: British naturalist Charles Darwin published ‘On the Origin of Species by Means of Natural Selection, or the Preservation of Favoured Races in the Struggle for Life‘, more popularly known as simply “On the Origin of Species”. Darwin had already been working on his theory of “natural selection” since 1938, as the idea of evolution had been floating around for some time then. Even his grandfather Erasmus Darwin, a respected English scientist, and French naturalist Jean-Baptiste de Lamarck  had envisioned and drawn evolutionary diagrams of one-celled organisms leading to man. But Charles Darwin was the first to study evolution through natural selection where he observed that organisms with genetic variations to suit their environment tend to propagate  biological traits that become either more or less common in a population. This slowly results in populations changing to adapt to their environments and the variations accumulate over time to form a new species.  Darwin was said to have been hesitant to publish his thesis initially, in fear of religious backlash. However in 1858, Alfred Russel Wallace published an “introduction” of species, that pointed out patterns of new species coming into existence in close proximity of other closely related species, a theory with a lot of similarities to Darwin’s. With the encouragement of Charles Lyell, a prominent geologist, he finally published his book on Thursday, 24 November 1859. A total of 1,250 copies of this first edition were printed and distributed at the price of fifteen shillings a piece.

1932: The FBI (Federal Bureau of Investigation), officially opened a Scientific Crime Detection Laboratory (better known as the FBI Crime Lab) in Washington D.C. Although the founding of the Lab was decided over the course of several months during the summer and fall of 1932, it’s official birthday and opening was set as  November 24, 1932.  With only one full-time employee, Special Agent Charles Appel, the FBI, under the leadership of J. Edgar Hoover set up a single room with a necessary sink as a laboratory to investigate evidence from crime scenes. Initially started more as a publicity stunt than for actual function, the first piece of evidence investigated by the new lab was a almost a year later in November 1933, a case of poisoning where the victim, a mental patient in a Pennsylvania veterans’ hospital, Harrington Fitzgerald Jr., received a box of chocolates, ate it, and died. As the crime occurred on federal property, the FBI (then known as the U.S. Bureau of Investigation) took charge of the investigations and gathered samples of the victim’s sister’s (the primary suspect) handwriting. They sent the samples along with the package’s wrapper and card to their Headquarters for analysis in the Bureau’s new Technical Laboratory (a.k.a Crime Lab). Special Agent Appel solved the case after careful analysis of the evidence and determining the exact typewriter used for the mailing label on package of poisoned candy. Today, the FBI Crime Lab deals with over 600 new pieces of criminal evidence every day.

1950: Dubbed the storm of the century, the ‘Great Appalachian Storm’ also called “The Great Thanksgiving Storm”, an extratropical cyclone hits the North-Eastern states of America and the Appalachian mountains. As the name suggests, the storm that occurred around the Thanksgiving weekend of 1950 was one of the most damaging and meteorologically unique winter storms to ever strike the United States. Preceding the storm on the 23rd of November, temperatures plummeted from the 40s and 50s Fahrenheit to the teens (‘La Niña’ conditions),  all along the storm front which was around the Ohio and Tennessee Valleys into the Appalachians. The dramatic drop in temperature brought with it between 7-30 inches of snow across a number of states. On the morning of November 24, the cyclone that initially formed brought on hurricane force peak winds and near-blizzard conditions. The worst of the storm conditions peaked on November 25th, with 110mph winds in Concord, New Hampshire and 160mph in the New England highlands, but it began weakening as it went over the Great Lakes . Overall the storm impacted 22 states with a severe cold wave that continued through to November 27. The arctic air mass behind the front set records of all-time monthly lows across the Upper Midwest and Ohio Valley.  Chicago dropped to -2ºF on the 24th, Louisville -1ºF, Lexington -3ºF and Bowling Green -7ºF. Pickens, West Virginia recorded 57 inches of snow; Pittsburg, PA received 30.5 inches with temperatures in the single digits. Just 200 miles to the north, in Buffalo, NY, people were largely unaffected by the storm and enjoyed temperatures in the 40s and recorded no snow at all. Overall,  353 died and damages reached around $66.7 million.

1963 :  Lee Harvey Oswald (a former U.S Marine) suspected of assassinating President John F. Kennedy was killed by nightclub owner, Jack Ruby, while being transferred from the police station in front of a huge crowd of people and the media. Oswald shot and killed a policeman who questioned him on the street roaming near his house in Dallas, Texas  less than an hour after the  President’s assassination. Thirty minutes later, he was arrested and became the number one suspect for the President’s shooting. Ruby shooting Oswald happened during a live broadcast on national television. Ruby claimed to be distraught over Kennedy’s assassination, when questioned about his actions.