The First Gas/Electric Hybrid Vehicle was Invented in 1900 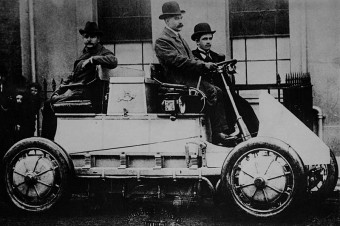 Today I found out the first gas/electric hybrid vehicle was invented in 1900.

While hybrid and electric cars are often touted by the media and automobile companies as the wave of the future, in fact, we’re more just re-hashing the wave of the past with them, but with updated technologies.

Before gas cars ruled the road, first steam, then electric cars were king, with a few manufacturers also coming up with hybrid gas/electric cars to get around the limited range and high weight of electric vehicles from the large number of battery cells needed.  Besides causing problems while climbing hills and the like, this high amount of weight particularly caused issues for the tires of the day, which still used soft white rubber without carbon black added to significantly increase certain desirable qualities of the tires over white tires. (more on this here)

Enter Austrian Ferdinand Porsche.  Porsche had little formal engineering training outside of attending occasional classes at the Imperial Technical School in Reichenberg and later sitting in on certain classes in Vienna after getting a job at the Béla Egger Electrical Company.

This lack of formal training didn’t stop him from designing the “System Lohner-Porsche” at the age of 23 in 1898.  This car would not only be the world’s first front wheel drive vehicle, but would also be the basis for the world’s first gas/electric hybrid.  The Lohner-Porsche had two in-wheel electric motors and was powered by on-board batteries.  They later added two more in-wheel motors making it one of the first four wheel drive cars in existence and the first to have a four wheel breaking system.

Because the motors for turning the wheels where embedded in the front wheel hubs themselves, this significantly increased the efficiency of the system by reducing mechanical friction- eliminating the need for a gearbox, clutch, drive shaft, etc.

Porsche followed up the Lohner-Porsche with the world’s first fully functional gas/electric hybrid vehicle, the Semper Vivus (“Always Alive”).  As mentioned, this car was based on the Lohner-Porsche car design, but reduced the number of battery cells from 74 to 44 and added two internal De-Dion-Bouton 2.5 HP combustion engines to power two generators, producing a total of 3.68 kw.

This first hybrid car system worked by having the generators send electricity directly to the electric motors with any excess being used to charge the batteries. This car also had the capability of running just off batteries with the combustion engines turned off, if the driver so chose.

The Semper Vivus still had a few problems.  It was fairly bare bones, including having exposed gas powered engines, no shocks on the rear axle, and suffered from a problem of dirt being continually thrown up into various parts of the system, which often resulted in it temporarily breaking down.  In addition to that, it didn’t really solve the problem of weight as it ended up being 70 kg heavier than the original Lohner-Porsche, despite the significant reduction in batteries.  Nevertheless, the Semper Vivus is estimated to have been capable of a top speed of 22 mph with a range of about 124 miles on a full tank, both of which were very good for the day.

Porsche followed the Semper Vivus up with a production capable hybrid, the Lohner-Porsche Mixte in 1901.  The Mixte drastically cut back on the number of battery cells and introduced a much more powerful motor (25 hp), among many other significant improvements.  Among its various accomplishments, the Mixte won the Exelberg Rally in 1901. (Porsche himself drove it at that rally.)  And it broke the Austrian speed record, with a top speed of 60 km/h (37.2 mph), and later the four wheel version was able to get up to 112.6 km/h (70 mph).

Other improvements were made to the Mixte and numerous other hybrid cars were soon developed by various manufacturers with thousands of gas/electric hybrid and electric vehicles being sold throughout the world until Henry Ford and various other factors came into play.

Due in part to his innovative assembly line construction, by 1915 Henry Ford was able to offer his cars at a base price of around $500 a piece (equivalent to about $10,000 today), which made his cars affordable for even the non-wealthy.  In contrast, at that time the average price of an electric car had steadily risen to about $1700 and hybrids were typically much more than that.  This was also around the same time crude oil was discovered in Texas and Oklahoma, which drastically reduced the cost of gasoline so that it was now affordable to average consumers.  Also, Charles Kettering invented the electric starter, which eliminated the need to hand crank gas powered engines. Roads began expanding, spurring the need for greater range than electrics alone could provide at the time.  This was not only because of the range factor, but also because gasoline cars were now becoming significantly faster than electric cars.  Hybrids could cover the distance and some were quite fast, but they were much more expensive than their non-hybrid gas powered counterparts.

Thus, by 1935 the electric and hybrid cars were officially comatose and they wouldn’t be revived until around the 1960s and then still unsuccessfully until showing promising signs of life in the last decade or so.