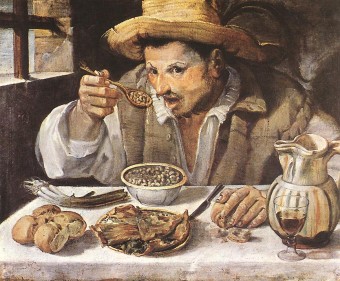 The Beaneater, by Annibale Caracci

Today I found out why beans give you gas.

Beans contain a sugar molecule called ‘Oligosaccharides’. These types of sugars cannot be digested by the stomach or small intestine. They get passed on to the large intestine where numerous types of bacteria begin to break them down. During the process, the bacteria release several different types of gases, mainly hydrogen, nitrogen and carbon dioxide. Don’t be concerned about these particular gases, they are stench-free!  Your fetid flatulence affliction is from a different source.

When you eat any food, your body has to process it. You can think of your digestive tract, that path between your mouth and your anus, as a system that is essentially outside of your body, just contained within it. It’s the job of your digestive system to break down the foods we take in, allowing the nutrients to “cross-over” into the different body systems and organs for use as fuel. Each different part breaks these foods down differently. For example, the mouth chews it up into smaller parts, the stomach uses enzymes and acids to further break it down. The food then goes to the small intestine where most of the nutrients that come from our food (proteins, fats, and carbohydrates) get absorbed into the bloodstream by a process called diffusion. What is left over is then passed to the large intestine whose main job is the absorption of water that remains in the indigestible residue of food. A smaller role of the large intestine is also to break down polysaccharides (fiber) that gets passed into it. One type of fiber is the aforementioned Oligosaccharides.

Oligosaccharides are basically sugar molecules that are made up of several different types of monosaccarides (usually 2-10) to form a polymer. An enzyme that would break these molecules down does not exist anywhere inside the human body. Therefore, when they passed into the large intestine, they serve as food for the countless microbes present. This is important for our health as these bacteria are necessary for creating different vitamins that get absorbed into the body as well as for the production of antibodies that help fight off certain types of infections. The downside is that the gaseous side effect of these bacterial processes tends to clear rooms everywhere.

You might have resigned yourself to the fact you can never eat beans before going on a first date, but fret not! There are some methods to prevent your noxious abdominal expulsions. For instance, there is a type of mold called Aspergillus niger that contains an enzyme (Alpha-Galactosidase) that will break down Oligosaccharides, preventing your large intestinal bacteria from creating gas. You can buy it at stores everywhere under the auspicious name “Beano“. If you don’t want to be seen sprinkling your beans with this product, you can always try soaking your beans in water for several hours before you make your food. This softens the beans and allows them to ferment. The yeast produced can consume the offending Oligosaccharides and help leave your dinner date vapor-free!