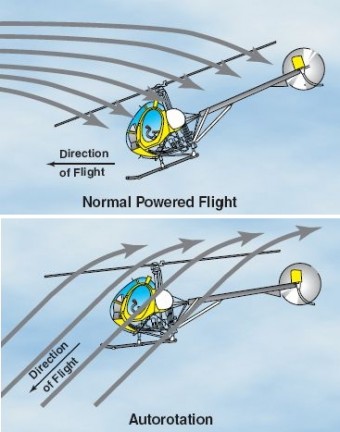 Myth: Helicopters will drop like a rock when the engine shuts down.

In fact, you have a better chance at surviving in a helicopter when the engine fails than you do in an airplane. Helicopters are designed specifically to allow pilots to have a reasonable chance of landing them safely in the case where the engine stops working during flight, often with no damage at all.  They accomplish this via autorotation of the main rotor blades.

Further, when seeking a helicopter pilot’s license, one has to practice landing using this no-power technique.  When practicing, instead of actually shutting the engine off completely though, they usually just turn the engine down enough to disengage it from the rotor.  This way, if the student encounters a problem during a no-power landing, the helicopter can be throttled back up to avoid an accident. Given that this isn’t an option during actual engine failure, it’s critical for helicopter pilots to practice this until they have it down pat.

A landing via autorotation is also sometimes necessary if the rear rotor blades stop functioning properly, no longer countering for the torque of the main rotor blades, so the helicopter will spin if the engine isn’t turned off.  Whether this happens and the pilot shuts off the engine or in the case of actual engine failure, once the engine drops below a certain number of revolutions per minute, relative to the rotor RPM rate, a special clutch mechanism, called a freewheeling unit, disengages the engine from the main rotor automatically.  This allows the main rotor to spin without resistance from the engine.

Once the engine fails or otherwise is shut off, the pilot must immediately lower the pitch, reducing lift and drag, and the helicopter will begin to descend.  If they don’t do this quick enough, allowing the RPM of the main rotor to drop too far, they’ll then lose control of the helicopter and will likely not get it back.  When this happens, it may well drop like a rock.  However, this isn’t typical because as soon as the freewheeling unit disengages the engine, the pilot is trained to respond appropriately immediately.

Exactly what the correct glide angle is to maintain optimal rotor RPM varies with different helicopter designs, but this information is readily available in the helicopter’s manual.  The glide angle also varies based on weather conditions (wind, temperature, etc.), weight, altitude, and airspeed, but in all cases a correct glide angle has the effect of producing an upward flow of air that will spin the main rotor at some optimal RPM, storing kinetic energy in the blades.

As the helicopter approaches the ground, the pilot must then get rid of most of their forward motion and slow the decent using the stored up kinetic energy in the rotors.  If done perfectly, the landing will be quite gentle.   They accomplish this by executing a flare, pitching the nose up, at the right moment.  This will also have the effect of transferring some of that energy from the forward momentum into the main rotor, making it spin faster, which will further allow for a smooth landing.  Because the flare will often need to be somewhat dramatic, the tricky part here is making sure that the rear of the helicopter doesn’t hit the ground. Ideally the pilot executes the flare (hopefully stopping most all the forward motion and slowing the decent to almost nothing), then levels the nose out just before touchdown.

Autorotation may sound like a fairly complex and difficult thing to do, but according to one instructor I briefly chatted with about this, it’s really not all that difficult compared to a lot of other aspects of flying a helicopter.  In fact, he stated that most students have a lot more trouble when they first try things like hovering, than they do when they first try a no-power landing.  Granted, this is partially because students don’t try autorotation landings until they are near the end of their training, so they are more skilled than when they first try a lot of other maneuvers, but still.  It’s apparently not nearly as difficult as it sounds and most of the problems students have just stem from being nervous at descending at a higher rate than normal.

You can see a video of someone executing a near perfect autorotation landing below: