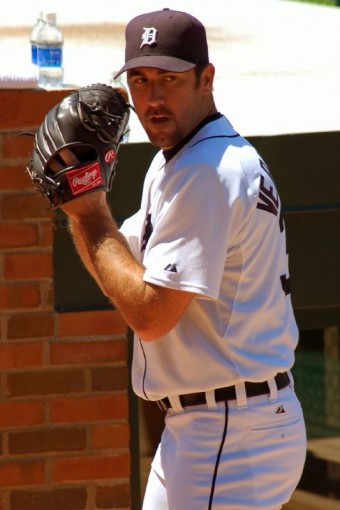 Today I found out that in High School, Major League Baseball star pitcher Justin Verlander traded a small percentage of his eventual $3.12 million signing bonus for a 50 cent chocolate milk.

This happened while the future MLB superstar was in the 10th grade at Goochland High School in Virginia.  Short 50 cents needed for a chocolate milk that day, he asked his friend Daniel Hicks for the money.

I forgot about it, but after I signed [with Detroit], he comes over and whips out this old napkin. I’m like, oh my God! My bonus was 3-point-something million.

That worked out to a little over $3K for the industrious Daniel Hicks who turned 50 cents into $3120 in just about five years when Verlander signed with Detroit in 2004 out of college for a guaranteed contract of $4.5 million (max $5.6 million) with a signing bonus of $3.12 million.

This might not have worked out quite so well for Hicks had Verlander not come down with strep throat at a key time in High School.  At that time, Verlander was regularly throwing 93 mph, but when scouts were coming to take a close look at him at the start of the season, he got sick with Group A Streptococcus (a.k.a. strep throat) and thereafter his velocity dropped to around 81 mph for a good portion of the rest of the season.  By the time he recovered most of his velocity at the end of the year (up to the high 80s at that point), the scouts were no longer around, so he went to college.  Had he signed out of high school, he very likely wouldn’t have gone nearly so high in the draft and his signing bonus would have been significantly less.

In college at Old Dominion University, he drastically bolstered his value in scout’s eyes in the three years he attended, setting a school record for strikeouts in a single game (17), a single season (139 and then broke it again at 151), all-time strikeout leader (427 in 335 innings), and finished with a 2.57 ERA in college.  In 2003, a year before he was drafted, he also helped the U.S. win a silver medal in the Pan Am Games.  Ultimately he was drafted second overall in 2004, after Matt Bush. His contract was negotiated directly by his father, as Detroit couldn’t reach an agreement with Verlander’s agent.

As you might expect from becoming instantly wealthy right out of college, Verlander does not regret signing the deal for the chocolate milk. “Was a chocolate milk worth $3,000? I want to say yes. I was parched.”