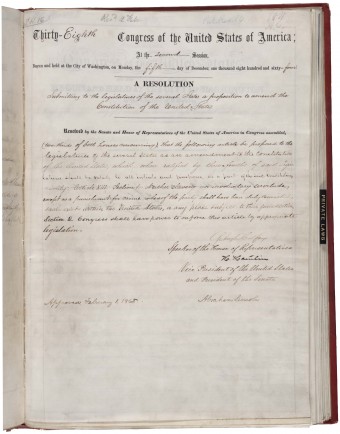 Today I found out Mississippi didn’t officially outlaw slavery until 1995.

While the Thirteenth Amendment was set into law, thus outlawing slavery anywhere in the United States, on December 6, 1865 when it secured the needed 27 of 36 states’ approval (3/4), it wasn’t until 130 years later on March 16, 1995 that Mississippi finally got around to ratifying the Thirteenth Amendment.  As you might expect, this made Mississippi the last state to ratify it, with the previous state of the initial 36 being Kentucky in 1976 and before that Delaware in 1901.  All three of those states, along with New Jersey, initially rejected the amendment in 1865, though just 9 months after rejecting it, New Jersey changed their mind and ratified it.  The others took a little longer.

Neither slavery nor involuntary servitude, except as a punishment for crime whereof the party shall have been duly convicted, shall exist within the United States, or any place subject to their jurisdiction.

Congress shall have power to enforce this article by appropriate legislation.

No amendment shall be made to the Constitution which will authorize or give to Congress the power to abolish or interfere, within any State, with the domestic institutions thereof, including that of persons held to labor or service by the laws of said State.

This Corwin Amendment managed to make it passed the House and the Senate in March of 1861 and was signed by President Buchanan thereafter.  Ohio, Maryland, and Illinois ratified it. Although, once the American Civil War started, the Corwin Amendment lost any momentum it had, because it had largely been proposed to forestall the chance of a Civil War.  Once the war started, Ohio rescinded their ratification.

The Corwin Amendment was passed without an expiration, so it’s still on the table today for states to ratify, if they so choose.  The most recent attempt to do so was in Texas in 1963, with a resolution to ratify it put forth by Republican Henry Stollenwerck from Dallas.  This failed to generate any momentum for the Corwin Amendment, though, and the resolution wasn’t considered by the state legislature.

If you’re curious, there are some exceptions to that “involuntary servitude” bit in the Thirteenth Amendment beyond as a “form of punishment”.  For instance, the Supreme Court ruled in 1918 that the military draft does not constitute “involuntary servitude”, even if the people drafted do not want to join the military.  This seems to fly in the face of the generally accepted legal definition of involuntary servitude which includes, “a person held by actual force, threats of force, or threats of legal coercion in a condition of slavery – compulsory service or labor against his or her will.”

This case was brought before the Supreme Court after the passing of the Conscription Act of 1917.  After this Act was passed, military tribunals tried various people who refused to bear arms, wear uniforms, etc. when drafted.  More shockingly, a board was put together to try consciousness objectors.  The only people at this time who were allowed to be conscientious objectors were Amish, Quakers, and members of the Church of the Brethren. If the board decided they weren’t sincere enough, they were sentenced.  These were no light sentences either, 17 people were sentenced to death, 142 were given life sentences in prison, and 345 were sentenced to penal labor camps for varying time periods.

The Supreme Court unanimously upheld the Conscription Act of 1917, citing Article I. Section 9, of the Constitution which gives Congress the power to “declare war… to raise and support armies… to make rules for the government and regulation of the land and naval forces.”  Of course, this says nothing about the government being able to force people to join the military, only that they have the authority to build and support the armies.  But, none-the-less, they upheld it anyways, further citing Vattel’s,  The Law of Nations:

It may not be doubted that the very conception of a just government and its duty to the citizen includes the reciprocal obligation of the citizen to render military service in case of need, and the right to compel it. … To do more than state the proposition is absolutely unnecessary in view of the practical illustration afforded by the almost universal legislation to that effect now in force.