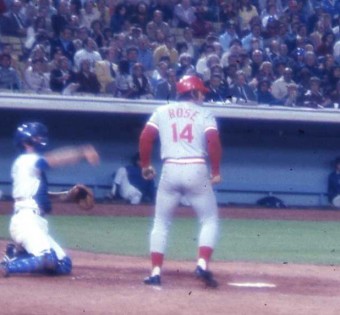 Pete Rose started managing in 1984, while he was still a player, and continued on managing until 1989, with the latter three years of that as just a manager and not a player/manager.  He was placed on the permanently ineligible list in 1989 after allegations surfaced that he was betting on baseball games, including betting on Reds games, the team he was managing.  Major League Baseball subsequently investigated these allegations and placed Rose on the permanently ineligible list when they found them to be true.

In exchange for Rose voluntarily being placed on that list, Major League Baseball agreed not to formally reveal their findings on his gambling habits.  However, it is known that he bet on at least 52 Reds games between 1986 and 1987, though there was never any evidence that he bet against the Reds, which I personally think would be the key point.

Shortly after being banned from baseball, Rose was arrested and served five months in prison for failing to count horse racing winnings and money earned from selling autographs on his income taxes.  The total amount he was deficient in back taxes was $366,041.

Although officially banned from all MLB related events and activities, costing him millions in potential income, Rose was allowed to participate in the pregame events before Game 2 of the 1999 World Series.  The ban was lifted for a night because Rose had been selected by fans to the “All-Century” team.

It’s interesting that the Baseball Hall of Fame keeps people out due to gambling, via the permanently ineligible list ban, but not for cheating, even admitted cheating.  For example, once his career was over, Hall of Famer Whitey Ford admitted that later in his career he had frequently cheated by doctoring baseballs.  His favorite method was to mark up the ball using various sharp objects, such as his wedding ring.  He also would have his catcher mark up the ball by sharpening a buckle on his shin guard and rubbing the ball against that before throwing it to Ford to pitch.  Elston Howard, his catcher, also used the mud around the batter’s box to coat one side of the ball before giving it to Ford to throw.

Another cheater who was celebrated for it and is in the Hall of Fame largely because of it is Gaylord Perry.  Perry’s case was particularly amusing because everyone knew he was doctoring the baseballs (often with Vaseline), but nobody could catch him at it.  He even admitted it in his 1974 autobiography Me and the Spitter.  He also stated, “I’d always have it in at least two places, in case the umpires would ask me to wipe off one. I never wanted to be caught out there without anything. It wouldn’t be professional.” It wasn’t until 21 years into his career that on August 23, 1982, he was finally caught and removed from a game for it.

Another Hall of Famer, Rogers Hornsby, once stated, “I’ve cheated, or someone on my team has cheated, in almost every single game I’ve been in.”  I guess columnist Thomas Boswell was right, “Cheating is baseball’s oldest profession. No other game is so rich in skulduggery, so suited to it or so proud of it.”

The tradition of professional baseball has been agreeably free of charity. The rule is, ‘Do anything you can get away with.’  (Heywood Broun, New York World, 1923)

I don’t put any foreign substances on the baseball. Everything I use is from the good old U.S.A. (Yankee Pitcher George Frazier)

I’d trip my mother. I’ll help her up, brush her off, tell her I’m sorry. But mother don’t make it to third. (Leo Durocher)

I didn’t begin cheating until late in my career, when I needed something to help me survive. I didn’t cheat when I won the twenty-five games in 1961. I don’t want anybody to get any ideas and take my Cy Young Award away. And I didn’t cheat in 1963 when I won twenty-four games. Well, maybe a little. (Whitey Ford)

If you know how to cheat, start now.  (Hall of Famer Earl Weaver)