This Day in History: Paraplegic Richard Hansen Sets Out to Circumnavigate the World in a Wheelchair 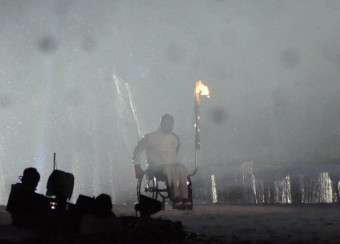 On this day in history, 1985, paraplegic Rick Hansen sets out to circumnavigate the land masses of the world in a wheelchair.   Hansen was inspired by Terry Fox, the Canadian athlete who lost his leg due to bone cancer and subsequently set out on the “Marathon of Hope” in 1980, running across Canada to raise money for cancer research.  Fox ultimately was unable to complete his run due to his cancer returning, which he soon died from.

Hansen decided he’d like to do a similar promotion, but decided to not just try to make it across Canada, but to travel around the world, raising awareness and money for spinal cord injury research.  He named this journey the “Man in Motion World Tour”.

On May 22, 1987, roughly two years after he started, his trip was complete.  During his expedition, he battled bouts of carbon monoxide poisoning, bladder infections, pressure sores, injuries to his wrists and hands, and a variety of other ailments.  Despite this, he covered a distance of 24,901.55 miles, traversing 34 countries and four continents, averaging just under 53 miles per day traveling (465 travel days out of a possible 792).  He also averaged 30,000 strokes per travel day before finally completing his journey.

As the point was to raise awareness and money for spinal injury related programs, he not only spent his days wheeling incredible distances, but also attended numerous community events and spoke at schools and hospitals across the world in his off time.  Thanks to these efforts, he managed to raise $26 million for spinal cord research and quality of life initiatives.