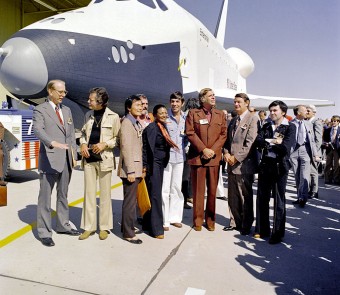 Today I found out the famous Star Trek line “…to boldly go where no one has gone before” is thought to have been inspired by a passage in a White House issued pamphlet on space.

Specifically, it is thought to be from this passage in the pamphlet, “Introduction to Outer Space“:

It is useful to distinguish among four factors which give importance, urgency, and inevitability to the advancement of space technology.

The first of these factors is the compelling urge of man to explore and to discover, the thrust of curiosity that leads men to try to go where no one has gone before.  Most of the surface of the earth has now been explored and men now turn to the exploration of outer space as their next objective.

The pamphlet was published on March 26, 1958 by the Presidential Science Advisory Committee.  It was originally made for the President’s benefit, but was released publicly by President Eisenhower, who hoped it would be widely disseminated throughout the U.S. and the world. It is a fascinating read (really, you should read it) and nearly as relevant today as it was when it was written, in terms of why we should pursue space travel and as a general, good non-technical introduction to space (as was the main point of the pamphlet).

Any article centering around the phrase “to boldly go” would be remiss if it didn’t mention the often cited grammatical error in that statement, with the use of a split infinitive.  However, since this is already an amazingly long article (primarily because of all the Bonus Facts below), I will just briefly say here that split infinitives are not incorrect grammatically, contrary to popular belief and what some English teachers will tell you, even today.  In fact, the majority of modern English grammar guides list split infinitives as being perfectly acceptable.  This has also been the case, not just in modern usage, but throughout a good percentage of the history of the English language (since those split infinitives first popped up around the 13th century).  For much more on this, click here: Split Infinitives are Not Incorrect Grammatically