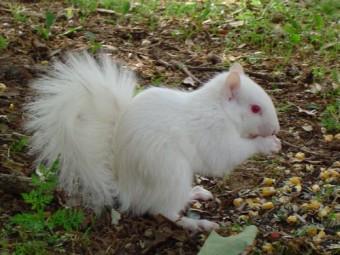 Today I found out squirrels can purr.

In September 2010 a baby squirrel named Rocky fell out of his nest in Mississippi. The family who found poor Rocky decided that their nursing cat, Emmy, would be the perfect mother for the little rodent. Rocky quickly became one of the litter and began to purr along with the other kittens. This little squirrel being taken in by a mother cat and developing the propensity to purr even made the local news. However, this isn’t news for wild animal rescue groups who have long known that squirrels could purr.

Other animals that have been said to purr include squirrels, rabbits, tapirs, lemurs, raccoons, gorillas and guinea pigs.  It should be noted, though, there is some contention over whether these animals can actually be considered to be purring.  The debate comes from the definition of the term “purr.”  Purr purists (I will refer to them as purrists) contend that the only true purr in nature is found in cat families (felidae), and two species of genets.  They state that a true purr is distinguished from a purr-like sound by the continuity of the purr during inspiration and expiration, with the animal needing to have the ability to make the sound go on continuously for minutes to be considered a real purr.

Since the noise these animals make does not meet the definition set forth by purrists, they say the noise is simply a purr-like grunt. In the case of the squirrel, it is thought that the purring noise is only audible on either inspiration or expiration and not both continuously, thus cannot be a true purr, by purrists standards.  Most, however, aren’t so strict on the definition, and contend if an animal can make a purring sound, they are able to purr.

Whether you’re a purrist and say the squirrel doesn’t actually purr, but only makes a purr-like noise, or you’re less “type-A” and are more in the “if it looks like a duck, and quakes like a duck…” crowd, I think we can all agree its adorable:  click here to hear a squirrel purr