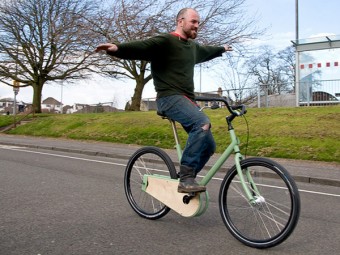 Today I found out gyroscopic effects have almost nothing to do with your ability to ride a bike.

The problem with the forces generated from the gyroscopic effect on a typical bicycle is that they simply aren’t very powerful when considering the physics involved in having the majority of the center of mass of the bike at the top (with you on it). You are basically forming an inverted pendulum, which is much harder to balance than the other way around.

To illustrate how much force is needed here, have a person get on a bike that is completely still. Now try and hold the bike and person centered by simply holding on around the axle of one of the tires.  To compare this force with the amount generated from gyroscopic effects, take a detached bike tire with pegs on the sides and hang on to them. Now have someone spin the tire really fast; once it’s spinning, try to lean the tire one way or the other.

In this later case, you’ll feel the gyroscopic effects, but you should be able to do it somewhat easily as the force you’ll feel here is likely only a few kilograms or 5-10 pounds (though it might feel like more with your arms outstretched and straight in front of you). In the previous case, with the person sitting on the bike, unless they were extremely light or you are Hercules, I’m guessing you couldn’t even come close to keeping them balanced, particularly if your arms are outstretched fully.

If that didn’t convince you, let’s look at the math (an example done by Dr. Hugh Hunt of Cambridge University):

Suppose I am falling over and I try to use the gyroscopic effect to help push me upright again. Consider some pretty frantic wobbling of the handlebars back and forth sinusoidally at a rate of, say, fhandle=1.6 wobbles per second (equivalent to an angular frequency of wobbling w handle= 2 p fhandle = 10 radians per second) and at an amplitude of, say, +/- 6 degrees (ie Mhandle= 6/180* p = 0.1 radian) .

So the gyroscopic effect on a bicycle, even at 12 mph, is practically nothing in terms of what would be required to keep you upright. So how are you not falling over every two seconds on your bicycle?

Partially this is due simply to your ability to balance.  However, you’ve probably noticed it’s hard to stay balanced on a bike when at a stand still.  When you start to go really slowly, you’ll notice you naturally make large steering corrections to keep yourself balanced.  This, in fact, is the primary thing that is actually keeping you upright on a bicycle at any speed, namely corrective steering. As you feel an imbalance in one direction, it will cause you to steer the bike in that direction to compensate, the resulting centripetal force ends up balancing you back out, assuming your adjustment was the proper amount of turn given your speed and other such factors. If you over turned, then you’ll have to make another correction to compensate for the imbalance created from your over correcting.  The faster you go, the smaller the correction that is needed to keep you balanced.

In the beginning, these corrective motions tend to be relatively large and often with you overcompensating, because your body is still learning to ride a bike. This is why you tend to be a bit wobbly and wreck a lot when you are first learning. Over time, these corrections will get smaller and smaller and more accurate until you don’t really notice you are doing them at all while you ride a bike above super slow speeds (obviously you’ll still notice them when barely moving on your bike and the like, as pointed out above).