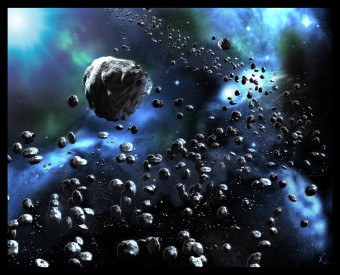 Today I found out it is actually quite safe to fly through an asteroid field.

The reality is that the asteroids in asteroid fields are incredibly far apart and most of the objects in these fields are very tiny. There are generally hundreds of thousands of miles between these objects and most of them are no bigger than a tennis ball (called meteoroids, with the cutoff for being called an asteroid at around 164 feet or 50 meters on a side).

In fact, if you added up the mass of all the asteroids in our solar system’s asteroid belt, it’s a mere 4% of the mass of our moon with about 1/3 of that total mass coming from one asteroid, Ceres, and about 1/2 of the total mass from just four asteroids, Ceres, Vesta, Pallas, and Hygiea.

So that’s our asteroid belt. What about others? Could there be an asteroid belt out there that would be dangerous to fly through? It’s a big universe, so it’s entirely possible that there exists such fields at any given moment in time somewhere in the universe, but it would be very unlikely that you’d encounter it, even if you could travel anywhere you wanted in the universe. The reason being that even if the asteroid belt is initially packed with debris that are colliding everywhere and basically is like what is depicted by Hollywood, this would quickly (on a galactic time scale) sort itself out with most of the mass being ejected from the belt, due to these collisions. Eventually, the system would stabilize itself to something like what our asteroid belt is. So you’d need to find a system that was just forming and even then you’d likely see vast distances between the objects in the fields in such a system.

It’s estimated that our asteroid belt once contained about 1000 times the mass it currently contains. However, within about one million years of its formation, it was down to somewhere in the vicinity of the stabilized amount we see today. Once this system was stabilized with almost no collisions, the asteroids simply travel in their respective orbits with the field itself neither increasing nor decreasing in mass significantly since that initial stabilization period.

So how many collisions actually occur in our solar system’s asteroid belt? Of the asteroids above about 6 miles wide, it’s expected they’ll encounter about one collision of some sort every 10 million years. While that’s certainly a lot of collisions on a galactic time scale, it would have made Han Solo’s daring flight through the Hoth system’s asteroid field a bit less dramatic if depicted accurately…