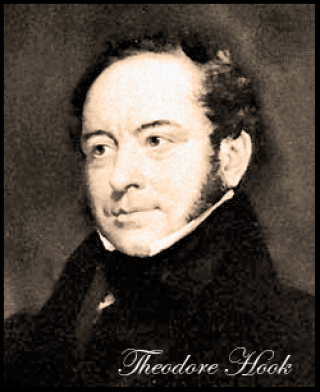 Today I found out about one of the great practical jokes of the 19th century, the Berners Street Hoax.

The year was 1809. Famed English author, Theodore Hook, made a bet with one of his close friends, the noted architect and writer, Samuel Beazley, that within one week, he could make any house in London the most talked about place in the city. The house he ended up choosing was the home of the widow Mrs. Tottenham on 54 Berners Street, London, which was the same street that Earl Stanhope and the Bishop of Carlisle and of Chester, among other wealthy and well-to-do individuals, lived on at that time.

It isn’t known why Hook chose Mrs. Tottenham’s home as no connection between the two is known and Hook himself never explained his selection. It’s entirely possible that it just happened to be a location where the home across the street could be rented and was also in a fairly well-to-do part of town which would help assure Hook’s plan would work.

Whatever the case, the event began on November 27th. Hook and Beazley positioned themselves in the home across the street and around 5:00 am, the fun began. First, a chimney sweep arrived. The problem was that Mrs. Tottenham hadn’t requested the services of a sweep. Within a few minutes, 12 more sweeps arrived; they too were also turned away. Next, coal delivery workers began showing up with several large carts packed with coal to be delivered to Mrs. Tottenham; they were turned away. Following this, a cart-load of furniture arrived; then workers showed up bearing a coffin for Mrs. Tottenham.

Next came several cake makers attempting to deliver very large custom made weddings cakes; then several other chefs arrived attempting to deliver a total of around 2,500 raspberry tarts. After that, several doctors, lawyers, gardeners, fishmongers, dentists, grocers, priests, couch makers, carpet-manufacturers, wig-makers, coach-makers, curiosity dealers, opticians, brewers, and shoemakers, among others, arrived. They all came offering their services or bringing very large orders of their wares that were to be delivered to Mrs. Tottenham’s address at various times throughout that day.

At one point, over one dozen pianos were delivered to her door step. After that, six men carrying a huge chamber organ showed up. Eventually the dignitaries arrived, including: the Governor of the Bank of England; the Duke of York; the Archbishop of Canterbury; the Mayor of the London; the Lord Chief Justice; several cabinet ministers; and the Chairman of the East India Company.

Throughout the entire day, various parties and delivery people crowded the area outside of 54 Berners Street. By mid-day, the streets in that area of London became so crowded that the roads were jammed for several blocks in every direction with delivery people and on-lookers.

All the while, Hook and Beazley sat and watched the chaos from across the street. Hook’s part in the madness, that did indeed become the talk of London, was not known until much later when he eventually confessed it. He did it all by sending around 4,000 letters out to various entities in London, ordering various items from the simple to outlandish. He also wrote several notable individuals like the Mayor of London and the like, creating tales sufficient to get those people to come and call on Mrs. Tottenham on that day.

What was written in most of the letters to convince these people to come isn’t known. One of the few that is known is the letter to the Mayor of London. Once he realized that everyone there was the victim of an elaborate practical joke, he went to the police station. At the police station, the Mayor stated that he had received a letter supposedly from Mrs. Tottenham explaining that she was at death’s door and she requested that the Mayor call upon her home to bear witness to a deposition she would give under oath.

After the hoax was revealed, the Mayor sent officers out to attempt to instill some order in the chaos in the streets, including attempting to calm the crowds who were reportedly on the brink of rioting with the streets jammed with angry travelers and hundreds of merchants who were infuriated that Mrs. Tottenham would not pay for the often massive orders of their wares they had come to deliver; some of these products were also completely destroyed by the crowds in the attempted delivery. Along with the damaged goods, several fights broke out throughout the day within the pressing masses.

Once the crowds dissipated late in the evening, Hook and Beazley emerged from the house across the street and went home. For successfully making the home the talk of London within a week of the bet, Hook reportedly received a guinea from Beazley.