Caterpillars “Melt” Almost Completely Before Growing Into Butterflies in the Chrysalis 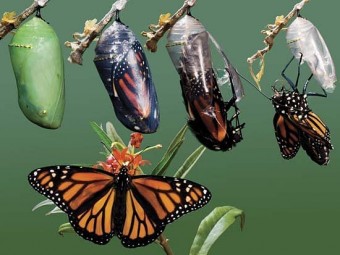 Today I found out caterpillars’ bodies “melt” almost completely before morphing into butterflies in the chrysalis.

In order for the change from a caterpillar to a butterfly to take place within the pupa, the caterpillar begins releasing enzymes that literally digest nearly all of its own body.  What’s left inside the chrysalis is mostly just a very nutrient rich soup from which the butterfly will begin to form.

It was thought until very recently that the caterpillar was completely converted to goo, excepting certain special cells necessary to create the butterfly body parts.  This idea has recently been debunked with researchers at Georgetown University proving that moths retain at least some of the memories they had when they were caterpillars.  For this to be the case, at least some of their memory storing neurons must survive the enzyme digestion process.  Further, these neurons must somehow be incorporated into the moth or butterfly’s brain, which is quite a bit larger and more complex than a caterpillar’s brain.

Once the process is complete, the imaginal disks ultimately replace nearly every part of the dissolved caterpillar’s body with new “parts”, forming the butterfly.