How the Digital Lines on a Televised NFL Game Work 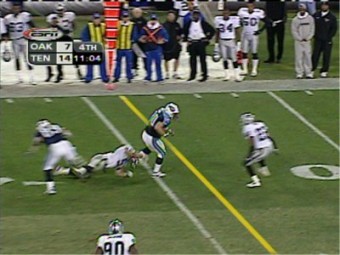 Today I found out how the lines projected on the field during a televised football game work.

What is happening behind the scenes of this seemingly simple line projection is actually quite complex.  Putting that yellow line across your television screen to mark a first down or a blue line to mark the line of scrimmage requires numerous technicians, 3-D mapping of every NFL field, copious amounts of sensors, eight computers, at least four people, and, according to Fox broadcasting, approximately $25,000 per game!

To get a better understanding of just how this is done, let’s start by looking at the problems that have to be solved. No NFL field is exactly the same. All fields are contoured to allow for water drain-off.  As such, every field has its own unique shape. Because the lines are computer generated, making a 3-D map of the football field that the computer can recognize is necessary.  The computer then has to know the orientation of the field with respect to camera positions. This allows the line to show up in the correct perspective based on where every yard line is. Because that same camera moves, the system has to be able to sense the movement and understand how to change where the line is based on the camera orientation.  Further, due to the fact that the game is filmed by several different cameras at different places in the stadium, the system has to do all of the work for multiple cameras at the same time. The system must also be able to sense when players, referees, or any object other than the field, crosses the yellow line, so it doesn’t paint the line over the top of them. Finally, the system must also be aware of any overladen graphics that the network might impose on the screen.

To solve all of these problems, technicians start with a special camera mount that records all of the camera’s movements such as zoom, focus, and tilt. This information is then fed to the computer so it knows what each camera is doing in real-time. Further, before the game starts, technicians make the needed digital 3-D model of the field being broadcast. Since all the camera locations are known by the computer. It can then take the 3-D model of the field, the locations and actions of the cameras, and orient the first-down line accordingly.

The ability to show the yellow line on the field and not on anyone or anything that it crosses is another matter altogether. This is accomplished by using layers of color. The technicians input different color layers into the computer before each game. One layer usually has colors like the greens and browns of the field. These colors will automatically be converted to yellow when and where the technician draws the yellow line. A cornucopia of other colors that could show up on the line (things like the players and officials’ uniforms, shoes, flesh, the ball itself, or any overladen graphics) are added into a separate visual layer. If any color other than the calibrated greens and browns get in the way of the yellow line, those colors remain and the yellow line disappears.

During the game, the computer continually analyzes all this information to decide where the yellow line should go, feeding the data to a linear keyer to superimpose the line onto the appropriate pixels in the video and refreshing it at an astounding 60 times per second. Walla! Every drunken football fan at home can now easily see where the 1st down line is!