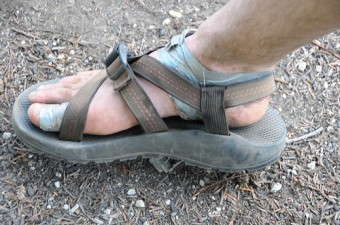 Today I found out what causes blisters.

We’ve all seen them, and unfortunately most of us have had one. Those painful, pockets of goo that form because some over exercised, over caffeinated, happy to be living life, outdoors-man decides to include you in their daily torture fest that is a hike up mount agony!  So what exactly is going on here that causes the formation of a blister?

Friction blisters are just that, the result of friction.  What’s going on under the surface is that repeated rubbing over one area of your skin will create forces that cause mechanical fatigue of the epidermis. This fatigue causes a split in the epidermis that usually resides at the layer of the Stratum Spinosum. When these cells separate, hydrostatic pressure allows a plasma-like blister fluid to form in this space. This fluid is similar to blood plasma in that it has the same electrolyte concentration, but with a much lower protein level. Should you continue the sadistic massage of your skin, the outer 3 layers of your puss pocket will break open, your salty fluid will leak out, and this portion of your epidermis will slough off. The resulting exposure to the last layer of the epidermis and the dermis itself (where your nerves are) is the red area that hurts like hell should you want to poke it with a stick!

The recovery of your exposed blister will begin after approximately 6 hours, as the remaining cells under your blister begin the process of healing. 24 hours into your rehabilitation, the cells are dividing like a mid-1990’s Microsoft stock. One day later, around 48 hours in to the restoration of your epidermis, a new Granular layer (Stratum Granulosum) can be seen. After approximately 5 days, this surge of cellular growth begins to slow down and a shiny new Stratum Corneum layer begins to show itself. Your new skin is ready!

Most blisters caused by friction do not require a doctor’s care. If the blister doesn’t pop, new skin will form underneath the affected area and the fluid is simply absorbed. Try not to puncture a blister unless it is large, painful, or likely to be further irritated. The fluid-filled blister keeps the underlying skin clean, which prevents infection and promotes healing. Should you need to burst your bubble, it might behoove you to follow a few simple techniques.

tagged with blister facts, cause of blisters, medical facts