What the “Bee” in “Spelling Bee” Means 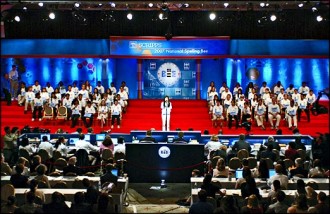 Today I found out what the “bee” in “spelling bee” means.

While no one knows exactly where the word derives from, the “bee” in “spelling bee” simply means something to the effect of “gathering” or “get together”.  The earliest documented case of this word appearing with this meaning was in 1769, referring to a “spinning bee”, where people would gather to protest purchasing goods from Britain due to the high taxes on those items.

Other gatherings that were commonly labeled with “bee” were: apple bee, logging bee, quilting bee, barn bee, hanging bee, sewing bee, field bee, and corn husking bee, among others.  Basically, any sort of major competition or work gathering, with a specific task in mind tended to get the “bee” label added on the end.  With many of these bees being tedious work events, it was also customary to serve refreshments and provide entertainment at the end of the task.

The first documented case of a spelling bee called such was in 1825.  However, it is likely that there were spelling bees before this date.  This was simply the first time someone seems to have written down in print that has survived to today “spelling bee”.

There are a variety of theories as to where this word derives from.  It was long thought that it simply came from the similarity between insect bees working together towards a specific task and a gathering of people to accomplish some task.  However, this etymology has no specific documented evidence to support it; rather, simply stems from making a logical leap.

The popular theory among etymologists today is that it is more likely that the actual origin of “bee”, in the sense of “gathering”, derives from the Old English bēn (prayer / favor).  This, in turn, gave rise to the Middle English “bene”, which had more or less the same meaning as bēn except now adding “an extra service by a tenant to his lord”.  Finally, this resulted in “bean” meaning “help given by neighbors”.  The British dialectic version of this word is then “bee”.