Adolf Hitler had a British Nephew Who Joined the U.S. Navy During WWII 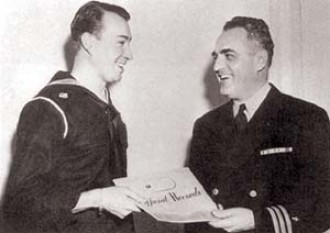 Today I found out Adolf Hitler had a British nephew who joined the U.S. navy during WWII.

Hitler’s nephew, who he would come to call “my loathsome nephew”, was originally named William Patrick Hitler, but he later changed it to William Patrick Stuart-Houston to distance himself from his uncle’s name after WWII.  William was born in Liverpool, the son of Adolf Hitler’s half brother, Alois Hitler, Jr., and an Irish woman named Bridget Dowling.

Prior to WWII, William moved from England to Germany where Adolf Hitler got him a job in a bank, which he subsequently left after convincing Hitler to get him a job at an automobile factory, as a salesman. At this point, Hitler began calling him “my loathsome nephew” and began publicly calling him out, stating, “I didn’t become Chancellor for the benefit of my family … No one is going to climb on my back.”

Getting nowhere further with his uncle, William then returned to London for a time and attempted to capitalize on his uncle’s fame there.  He later returned to Germany where Hitler eventually offered William a top ranking position with the Nazis if William would renounce his British citizenship.  William turned down the offer, fearing he’d be trapped in Germany in the coming conflict.

No longer caring to ask for a job or high ranking position, William subsequently began trying to blackmail his uncle, threatening to tell the media stories about Hitler and his family, including threatening to confirm a rumor that Hitler was the illegitimate grandson of the Jewish merchant, Leopold Frankenberger, if Hitler wouldn’t give him money. As you might imagine, this didn’t sit well with Hitler and William was forced to flee back to England, though some reports say he was given a sizable sum before being forced to leave.

Just before the start of WWII, William and his mother were invited to the United States at the invitation of famed publisher William Randolph Hearst.  Hearst then sponsored William on a nationwide lecture tour titled “My Uncle Adolf”, where William would tell stories about Hitler and the Nazis to audiences.

Once the war broke out, William tried to join the British forces, but was denied.  When the U.S. eventually entered the war, William appealed to President Roosevelt to be allowed to join the U.S. forces, stating why he felt he wasn’t being allowed to serve in the British forces: “The British are an insular people and while they are kind and courteous, it is my impression, rightly or wrongly, that they could not in the long term feel overly cordial or sympathetic towards an individual bearing the name I do.”

Roosevelt turned the matter over to the F.B.I. who eventually decided to allow William to join the U.S. navy, despite being a British citizen and the nephew of Hitler.    He served in the navy as a Hospital Corpsman and was discharged in 1947 after three years of service.