Cockroaches Would Not Survive an Extreme Nuclear Fallout 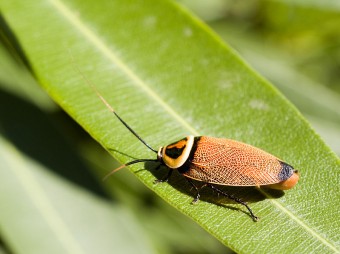 You’ve probably heard that “the only living things that would survive a nuclear war would be cockroaches and Cher”. The latter may be true, but the former is most definitely not. It has even be suggested that cockroaches can survive the amount of radiation at ground zero of a nuclear explosion, though of course, not the explosion itself if they were right next to it (assuming they weren’t in a lead lined refrigerator; then of course they’d definitely survive, as would humans. *looks disapprovingly at Indian Jones and the Kingdom of the Crystal Skull*)

In any event, more recent research has shown that, while cockroaches can withstand ionizing radiation bursts about 10 times as high as humans, they actually are relative light weights in that arena. In fact, it only takes a burst of about 1,000 rads to significantly interfere with a cockroaches’ ability to reproduce, which would obviously be the eventual end of the cockroach, if they were all exposed to this level. For reference, this is about the level of radiation at around 15 miles from Hiroshima directly after the bomb was detonated. (note: the Hiroshima bomb was a 15 kiloton weapon, which is nothing next to the megaton nuclear bombs that can be found in most nuclear stockpiles today.)

Further, at levels of around just 6400 rads, about 94% of immature cockroaches will die and at around 10,000 rads, most adult cockroaches will not survive. While this is very impressive by human standards (humans only being able to survive about 400-1000 rads before death), it’s decidedly unimpressive by insect standards; most insects can survive much higher rates than the cockroach, according to the United Nations Scientific Committee on the Effects of Atomic Radiation, who, when they aren’t spending their time trying to spit out their name, apparently enjoy zapping various living things with ionizing radiation. Squeal piggy!

So who are the actual living creatures that would inherit the Earth after a world-wide nuclear war? Well, it has been shown that fruit flies take around 64,000 rads to kill. More impressive than that is the flour beetle which can withstand up to around 100,000 rads before dying. Even better is a type of wasp, the Habrobracon, that can survive as high as 180,000 rads! These all get beat by the Deinococcus radiodurans microbe. This bacteria can survive radiation levels as high as 1.5 million rads at room temperature and nearly 3 million rads when frozen, such as during a hypothetical nuclear winter.