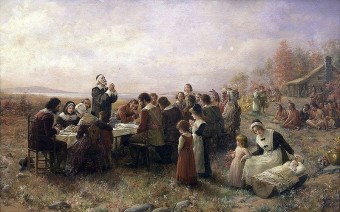 Myth: The Pilgrims Celebrated the First Thanksgiving in America.

Around the time the Pilgrims came to America in 1620, it was common in England and many parts of Europe to frequently set aside days for giving thanks to God. In the New World, where life was harsh in the beginning, there were numerous opportunities to hold such days of thanks, for example: any time a particularly good crop would come in; anytime a drought would end; anytime a particularly harsh winter was survived; anytime a group managed to repel an attack by Native Americans; anytime a supply ship arrived safely from Europe; etc. This sort of practice actually remained fairly common up until around the time when Thanksgiving became a national holiday. Most of these celebrations bore little resemblance to what we think of as Thanksgiving. Indeed, even the particular Thanksgiving day that the Pilgrims celebrated in the fall of 1621 bore little resemblance to what is depicted now.

So who actually celebrated the first Thanksgiving in America? Nobody knows for sure owing to how common these days of thanks were in the New World. Three popular examples that are often referenced as the actual “firsts” and that pre-date the Pilgrims date include: (for reference, the Pilgrim’s Thanksgiving took place sometime between September and early October of 1621)

So why is the Pilgrim Thanksgiving that happened in the fall of 1621 often considered the first Thanksgiving? This is largely thanks to Sarah Josepha Hale, author of the nursery rhyme “Mary Had a Little Lamb” and one of the most influential women in American history, as well as one of the most remarkable. (click here for more on Sara Hale and how Thanksgiving became a U.S. National holiday) She was particularly enamored with this Pilgrim event that she had read about in a passage by William Bradford in Of Plymouth Plantation as well as the particular Thanksgiving tradition which was somewhat common in New England at the time. She tirelessly campaigned for over 20 years to have Thanksgiving become a national holiday with a set date and was ultimately successful.

Through her highly circulated editorials, she was largely responsible for much of why we view the Pilgrim’s 1621 Thanksgiving how we do and was also largely responsible for many of the traditions we now tend to attribute to that Thanksgiving, even though there are actually only two brief passages that record what happened during the Thanksgiving celebration in the fall of 1621. For example, things like the tradition of eating turkey, mashed potatoes, stuffing, cranberry sauce, and pumpkin pie on Thanksgiving were all popularized by her and it is extremely unlikely that the Pilgrims ate any of those things.