Where the Term “Rock and Roll” Came From 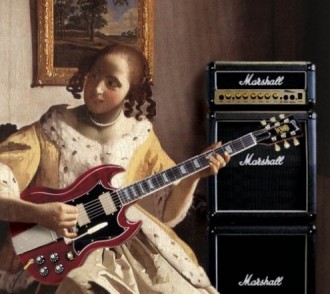 Today I found out where the term “rock and roll” came from.

The word “roll” has been used since the Middle Ages to refer to, among other things, having sex: “Let’s go for a roll in the hay”; “Rolling under the sheets”; etc.  The word “rock”, again among other things, has been used since at least the 17th century as a term meaning “shake or disturb”. A couple hundred years later, this had also spread to black gospel singers using “rock” to refer to being shaken in a spiritual sense, as in spiritual rapture (rocked).

By the early 20th century “rock” had morphed somewhat to being used as a slang term by black Americans referring to dancing to music with a strong beat, principally rhythm and blues- at the time called “race music” or “race records”.  The specific 1922 slang definition of “rock” was something to the effect of “to cause to move with musical rhythm”; it also had strong sexual overtones when used in this way.

Around this same time, these two terms, “rock” and “roll”, had naturally merged together, forming a double entendre, typically referring to very suggestive or scandalous dancing as well as simply having sex, depending on how you looked at it.  One example of this is the 1922 song “My Man Rocks Me, with One Steady Roll”.

Another early reference to the term “rock and roll” was a 1935 J. Russel Robinson lyric from Henry “Red” Allen’s Get Rhythm in Your Feet and Music in Your Soul,

If Satan starts to hound you, commence to rock and roll.  Get rhythm in your feet and music in your soul…

At this point, the phrase “rock and roll” was relatively well known among black Americans.  This particular tune was also later covered by quite a few popular white musicians, such as Benny Goodman, which may have helped spread this phrase somewhat.

The term got its biggest global boost through a Cleveland, Ohio disk jockey named Alan Freed.  Freed played early forms of rock and roll (mix of rhythm and blues and country music, primarily) on his radio show and called the mix “rock and roll”, a term he was previously familiar with from race records and songs such as “Rock and Rolling Mama” (1939) and “Rock and Roll” (there were three songs named this in the late 1940s).

Freed was encouraged to call this mix of music “rock and roll” by his sponsor, record store owner Leo Mintz, who was trying to boost sales on race records by getting white shoppers to buy them.  Race records weren’t very popular at the time among white people, but by re-branding the music “rock and roll”, the music quickly became extremely popular among teenagers of all ethnicities, largely thanks to this and Freed’s radio show, The Moondog Rock & Roll House Party.  (Incidentally, classic style “race records” were in the process of being re-branded around this same time to “Rhythm and Blues”, thanks to famed music journalist and producer Jerry Wexler.)

In any event, Freed’s show was also the primary reason why Cleveland was chosen for the location of the Rock and Roll Hall of Fame in the 1980s.  When deciding between cities, the selection board chose Cleveland owing to Freed having played a significant role in popularizing rock and roll music and the branding the style of music “rock and roll”, though he obviously didn’t coin the term itself, as noted previously.