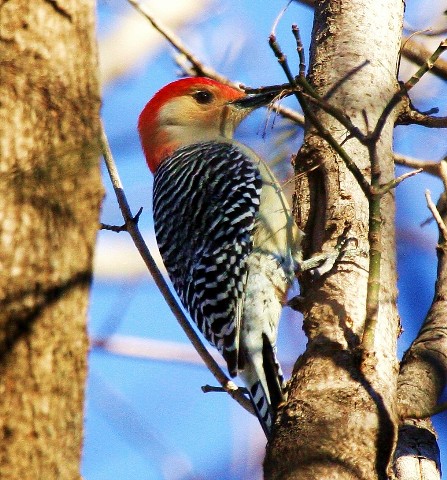 Today I found out that the tongue on a Red-Bellied woodpecker, along with some other species of woodpecker, is so long that it can extend at least three times the bill length and, when retracted, wraps around its skull.

According to a study conducted by the Dalian University of Technology in China,  Grey-Faced woodpeckers have a tongue that measures around 171mm (6.73 inches), which is about 2.8 times the length of their beaks (~60mm or 2.36 inches) and  typically even longer than their body length (~165mm or 6.5 inches, measured from the mouth tip to the buttock).

In this species of woodpecker, and some others, the tongue is so long that it forks in the throat, goes below the base of the jaw and wraps behind and over the top of the head, where the forked section rejoins and inserts in the bird’s right nostril or around the eye socket.

This bizarre tongue structure is possible because of a linear series of tiny bones sheathed in muscles and soft tissue known as “hyoid apparatus” that extends the entire length of the woodpecker’s tongue. This cartilage-bone like skeleton of its tongue is sheathed in muscle and soft tissue and the ultra-thin hyoid bones fold up like an accordion when not outstretched. Contraction of the muscles pulls the tips of the hyoid bone around the back of the head and back down toward the mouth, and in doing so, pushes the tongue out the mouth.

So what does our small feathered friend do with the talented tongue? After he has slammed his head against a piece of dead wood, or tree at the rate of around 15 miles per hour, repeatedly and several times over, (see bonus factoids as to why the little guy doesn’t get brain damage), he shoves his elongated tongue deep into the hole, searching for small bugs or insects. He’ll feel around the insects thin tunnels, and, when he finds one, he pierces it with his tongue , which is covered in sharp barbs like a spear, and then pulls it back in for eating. The woodpecker’s tongue also contains paired longitudinal muscles that allow it to move side to side as the bird probes for food. A woodpecker’s tongue is especially sensitive to touch, an adaptation that aids in detecting unseen insects within dead wood.

Not all species of woodpeckers have barbed tongues or feeding behaviors like that of the Red-bellied woodpecker. Take for example the Yellow-bellied Woodpecker {A.K.A. Sapsucker}. It burrows 1/4 inch holes and uses it’s tongue to lap up the sap, not unlike a hummingbirds tongue (except a hummingbird’s tongue is split and rolls into a shallow spoon like shape). Oddly enough though, a baby woodpecker’s tongue is actually quite short, making it much easier for a parent bird to stick food items into their hungry little mouths.