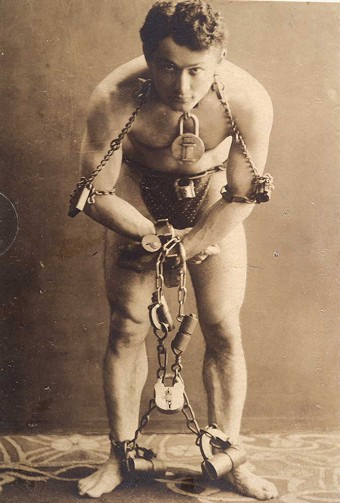 Houdini initially became fascinated by aviation in 1909, purchasing a French Voisin biplane for $5000 and subsequently hiring a full time mechanic to maintain it.  In his first flight attempt, he crashed the plane, but with the help of his mechanic, fixed it up and made a successful flight on November 26 in Hamburg, Germany.

One year later, in 1910, Houdini agreed to travel to Australia, something he had previously sworn never to do because of the long boat ride (he was prone to sea sickness) and the distance it would place him from his family.  For the journey, he brought along his biplane and made the first controlled powered flight in Australia on March 18, 1910, north of Melbourne at Diggers Rest, Victoria.  The flight lasted only one minute, due to the weather being slightly unsafe at the time.  Later in the day, he made two more flights, the first nearly crashing, due to a side wind, and in the second managing to fly for three minutes.  A few days later, he managed a flight that lasted seven minutes and 37 seconds, which was quite an impressive length at the time.

Shortly before Houdini set the record, a rival pilot, Ralph C. Banks, showed up and attempted to be the first to make a controlled, powered flight over Australia, but ended up crashing his plane due to poor weather conditions, which is why Houdini had not yet tried to fly.  Up to this point, Houdini had left his plane only to do his performances in Melbourne and otherwise slept under his plane, waiting for a window to fly the plane when the weather was just right.