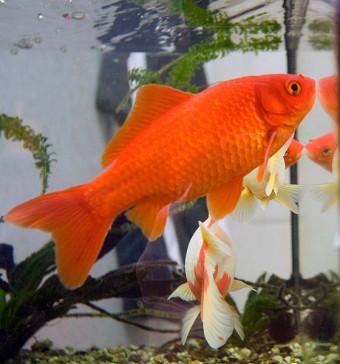 In fact, goldfish actually have very good memories for fish. They can be trained to respond various ways to certain colors of light; different kinds of music; and other sensory cues. Not only that, but they seem to be able to remember things they are taught as much as a year later. Researchers have successfully taught goldfish to play fetch, push levers, do the limbo, and even play soccer. If they are fed around the same time of day, they also remember that and will anticipate the feeding leading up to that time, which implies they have a very good sense of time.

Goldfish also have been shown to be able to recognize their masters and even pick their favorites (usually the one who feeds them). Around certain people the goldfish is very familiar with, they will often be much more active when they see the person and even sometimes stop considering the person any sort of threat, including if that person sticks their hand in the water and tries to touch them. Around strangers, on the other hand, the goldfish will often hide. Blind goldfish also exhibit this same type of behavior, except they respond to the voice of their owner, similarly to how the non-blind goldfish respond to the sight of their owner.

In one experiment, researchers even got the goldfish to learn that if they pressed a certain lever at a certain time of day (for a span of about an hour), they would get food for this action. If the lever was pushed any other time of day, nothing would happen. In very short order, these goldfish learned to only bother pushing the lever during the time of day it would produce food; the rest of the time, they ignored it.

In another experiment, researchers trained young goldfish to associate a certain sound with feeding time. They then released these fish into the sea. About half a year later, when the fish were fully grown, the researchers broadcast the sound over a loudspeaker and the fish swam from wherever they were in the sea, back to where they were released. This has been proposed as a method to cut down the cost of raising fish for consumption. Teach them to come when they are young and then release them into the ocean and lakes to grow to adulthood naturally. Better for the environment; less cruel to the fish (relatively speaking); and cuts down on costs of raising the fish drastically.