What the Dot Over the Lower Case Letter “i” is Called 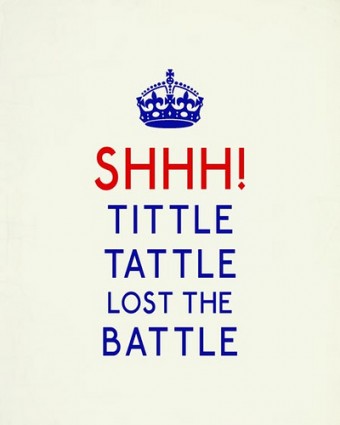 Expression and poster used in WWII, warning soldiers that if they idly chatted about their mission, the enemy could learn their plans.

Today I found out what the dot over the lower case letter “i” is called, namely a “tittle”.

While this isn’t a commonly used word any longer, the expression “jot or tittle” still endures in some places, meaning something to the effect of “a very small amount” or “iota”.  A classic example of this expression can be seen in the Gospel of Matthew (5:18): “For assuredly, I say to you, till heaven and earth pass away, one jot or one tittle will by no means pass from the law till all is fulfilled” (NKJV)

The word “tittle” itself comes to us from the same Latin word that “title” derived from, but has since come to mean something very different, namely a small stroke or mark in writing, generally referring to the dot over the lower case letter “i”, when used at all.

Another expression that is associated with “tittle” is the expression “to a T”, being a shortened version of “to a tittle”, meaning “precise / exact down to every last detail”.  As much as a hundred years before “to a T” first showed up, “to a tittle” was a common expression meaning the exact same thing as “to a T” came to mean, so it is thought the former led to the latter.