The Word ‘Dinner’ Used to Refer to Breakfast 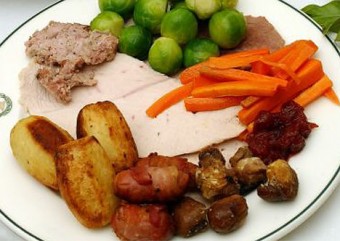 Today I found out that the word ‘Dinner’ used to refer to breakfast.   The word “dinner” comes from the Old French word “disnar”, which in fact means “breakfast”.

So how did this word that meant breakfast end up being pushed back in the day to describe the meal latest in the day?  Traditionally dinner (meaning ‘breakfast’) was the first meal of the day, eaten around noon.  It also happened to be the biggest meal of the day, with a lighter meal coming later known as supper.  Eventually, more meals started being added to the day with people eating meals before the large noon meal of dinner.   Rather than calling these earlier meals that broke the fast by the word that means breakfast (dinner), the name “dinner” now stuck as meaning the largest meal of the day.

As time has passed, in most cultures that use these words to describe their meals, the largest meal of the day gradually got moved later and later in the day until its meal time was around the time we used to have supper (which used to be a light meal).  So gradually this meal that bears the name (translated) “breakfast” is now the meal we eat before we start the fast and the literal translation of “dinner” is now the word we used to describe our early morning meal of breakfast.  In most cultures where this shift has happened, “supper” is now considered to be the proper name for a midnight snack.

It should be noted that there are still many cultures that use these words to describe their meals that don’t go by the “Breakfast, Lunch, Dinner” name scheme; rather, they now go with “Breakfast, Dinner, Supper”, choosing to refer to lunch as “Dinner”.  In which case the meal bearing the name “Dinner” didn’t move at all.  Just one extra meal got added earlier in the day.