Everything You Know About Velociraptors Is A Lie 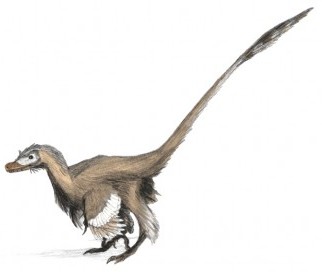 Today I found out everything you probably think you know about Velociraptors is a lie.

Now to be fair, everything I “knew” about Velociraptors came from the Jurassic Park movies and so I shouldn’t really be surprised it was all wrong.  So if, like me, you thought that Velociraptors were slightly bigger than a human; reptilian looking;  hunted in packs; were found in what is now the United States; and were ridiculously intelligent.  Well, literally none of that is true.

Velociraptors were actually only about the size of a domesticated Turkey, being only about 3 feet tall and 6 feet long, with most of the length coming from the tail and weighing in at around 20-30 pounds full grown.  More than that, they also looked somewhat like a Turkey as well, but with a long tail obviously.  It turns out, Velociraptors were very similar to birds in a lot of ways.  They had hollow bones, feathers, built nests for their eggs, and are thought to have behaved very similar to birds.

As Mark Norell, curator of fossil reptiles, amphibians, and birds at the American Museum of Natural History, stated, “The more that we learn about these animals the more we find that there is basically no difference between birds and their closely related dinosaur ancestors like Velociraptor. Both have wishbones; brooded their nests; possess hollow bones; and were covered in feathers. If animals like Velociraptor were alive today, our first impression would be that they were just very unusual looking birds.”

Next up, the Velociraptors were not found in the United States, as the films suggested: where the paleontologists in the film dug up the Velociraptor skeleton in Montana.  In fact, they have only been found in Central Asia around Mongolia.

Were they intelligent?  Well, for a dinosaur, it is thought they were somewhat intelligent due to their brain size relative to body size.  But it turns out, that’s basically just saying they were slightly more intelligent than a board with a nail in it.  For reference, the dinosaur that is thought to have been the smartest of all dinosaurs was the Troodon; it is thought to have been around as smart as a primitive opossum.   So there goes the whole Philosraptor thing out the window.  The deepest thoughts a Velociraptor ever thought were probably on the level of the Seagulls in Finding Nemo. “Mine?”   Hardly the “smarter than dolphins, whales, and some primates” that Dr. Alan Grant in Jurassic Park III suggests.

Actually, if you’ve ever raised domestic Turkey’s, which I have and don’t recommend, the “just slightly more intelligent than a board with a nail in it”, is about the domestic Turkey’s level of intelligence too.  I’m beginning to think Velociraptors were nothing but domestic Turkeys with slightly different bone structure. 😉