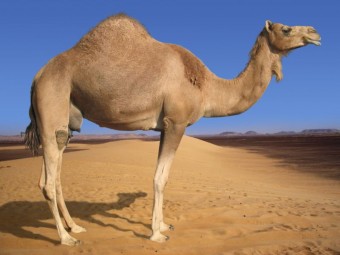 Today I found out Camels’ humps are not filled with water.

So what are Camel humps filled with?  It turns out, fat.  These fat humps can weigh as much as 80 pounds and allow the Camel to comfortably go one to two weeks without eating, if necessary.

Now, some of you out there might be saying to yourselves, “Well, but 1 gram of fat actually gets converted to more than 1 gram of water during the metabolic process, so it actually is a kind of water store.”  This is correct in principle, but ends up not helping the Camel out any in terms of water supply.  Even though more water is produced processing the fat than there was fat, gram for gram, the metabolic process actually uses quite a bit of water due to the arid conditions Camels live in.  Basically, they lose a lot of water through their lungs getting the oxygen necessary to process the fat. So the net effect of processing the fat actually results in less water than there was before.

So where do the Camels store extra water?  It turns out, mostly in their blood and other places there are already fluids in their body.  There really is no central water store anywhere in a Camel.  What allows a Camel to survive in desert environments is mainly just that they are incredibly efficient with their water usage.  In fact, they are so efficient, that in milder climates a Camel can get all the water they need just from eating relatively green plant life.

Their bodies conserve water in just about every way imaginable.  For instance, when they pee, their urine contains very little water, being more of a pasty substance that has approximately the consistency of syrup.  On the other end of things, their feces comes out almost completely dried out and can be used right away by humans for making fires or the like.  For comparison, human fecal matter typically is made up of about 75% water.

A major area most animals lose water, particularly in arid environments, is by breathing.  Camels are no exception, but their breathing system is much more efficient than most.  Their nostrils have a mechanism for trapping moisture in their breath before it is exhaled.  This moisture is then returned to their bodily fluids.

The other major area most mammals lose water in hot areas is through sweat.  It turns out, Camels don’t need to sweat very much to stay cool. There are a few things that go into this, most impressive of which is that their body temperatures can comfortably range from about 93 degrees Fahrenheit to 106 degrees Fahrenheit without any real negative side effects.

Their bodies are also well equipped for keeping heat out (for more on this see the Bonus Factoids section below).  After a cool desert night, their body temperature will be around 93 degree Fahrenheit.  Given their large size and their body’s ability to keep heat out, it ends up taking a while for their temperature to rise to closer to the 106 degree Fahrenheit level.  So in some cases, the Camel may not need to sweat at all during a given day, depending on the ambient temperature and how hard they are working.

However, if they do get close to that 106 degree Fahrenheit threshold, their sweat mechanism will kick in.  Like the rest of their body when it comes to water usage, their sweat mechanism is as efficient as sweating can be, with the sweat evaporating at the skin surface level rather than soaking into their hair and wasting some of the cooling effect in evaporating off that hair.

Another interesting thing is how a Camel’s body actually manages water internally.  When they need water, their body will first get the water from all fluid parts of their body except the bloodstream.  This allows their blood to continue to flow normally, even when they are relatively dehydrated.  They can withstand up to a 25% weight decrease from water loss and it isn’t until they start getting close to that level that their main store of water in their blood starts to get used.  For comparison on how impressive that 25% number is, most mammals will experience cardiac failure around 12-15% weight decrease due to water loss.